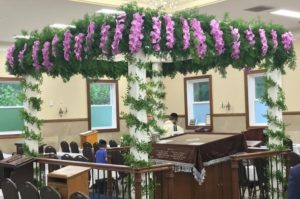 Shulchan Arcuh O.C. 494 – The Rema brings that there is a minhag to hang up greenery on Shavuos in the shuls and in houses, as a commemoration for the simcha of Matan Torah.

Interestingly, one of the early sources for this custom is the Targum Shaini on Megillas Esther Chapter 3, which relates Haman’s discussion with Achashveirosh where he slanders the Jewish people and their customs. One of the things which he derides is that they decorate their Shuls with greenery, flowers, and apples on Shavuos. Then they gather up the greenery and say, ‘Just as we gather up the greenery from the floor, so too G-d should gather us from among the Goyim.’ From here we see that there was an ancient custom to decorate the shuls with greenery.

Another source for the custom of putting out sweet-swelling flowers is from the Gemara, Shabbos 88B which says that for every word that came out of G-d’s mouth at Sinai the whole world became filled with the fragrance of sweet-smelling spices. Now, since the whole

The Gemara answers that G-d took the wind from his storehouse and blew the fragrance away to Gan Eden, in order to make room for the fragrance of the next word.

Maharsha (1555-1631) explains that the reason for this was that the people were weak from the thunder and awesomeness of Maamad Har Sinai; the spices invigorated them, giving them strength to be

able to withstand Matan Torah. (Similar to why we smell besamim after Motzai Shabbos in order to invigorate us after the neshama yesaira leaves.)

The Shelah (1565-1630) notes that in a place which has the custom to put out sweet-smelling greenery in the shuls on Shavuos, they should not begin to decorate until after Shemoneh Esrai so that people can make a bracha on the spices without interrupting the davening. However, the Chavos Yair (1639-1702) argues that it is permitted to make a blessing on the sweet-smelling greenery in- between Perakim, even before Shemone Esrai. It’s permitted to decorate even before Shemone Esrai as well.

Another reason for the minhag of celebrating with greenery mentioned by the Mogain Avrohom, O.C. 494 (1635-1682) is to remind us that on Shavuos we are judged regarding fruits from trees, and should daven accordingly regarding trees. Mogian Avrohom lived in Poland from 1635-1682 the century before the Gra and does not voice any concern of Chukos Hagoyim with regards to the custom of erecting trees. To the contrary, he endorses the custom as a way of reminding people to daven for the trees and fruits on Shavuos.

Pri Migadim (1727-1792) was a contemporary of the Gra, and does not mention any opposing views to the custom in his notes on the Mogen Avrohom on this topic.

The Gra (1720-1797) abolished the custom of decorating with greenery as he felt that nowadays it is chukos hagoyim since Gentiles put trees inside their houses and buildings in honor of their holiday.

It is a subject of discussion on whether the Gra abolished the custom of decorating with both trees and grass, or just trees.

Since, if the reason for ending the custom was because of Chukos

Hagoyim then it would seem to apply only to trees.

Perhaps the Gra would allow putting out plants, grass, and flowers as long as one does not put out trees.

The Mishna Berura seems to indicate that only the custom of putting out trees was frowned upon, not grass since grass does not seem to have the component of Chukos Hagoyim.

However, Aruch Hashulchan O.C. 494 (1829-1908) tells that in prior generations they ended the practice of decorating with trees and grass, ‘for the reasons which the Gedolim were aware’.

He mentions both trees and grass which indicates that he understood that the Gra was against decorating either with grass or with trees.

He does not specify the Chukos Hagoyim issue but rather alludes to it.

(Perhaps the Aruch Hashulchan does not spell out the reason of

it becomes forbidden because of Chukos Hagoyim. An example of this is a matzaiva that even though it was beloved to G-d in the days of

our forefathers, once it became a practice of idol worship it became

Chukos Hagoyim and the Torah forbade it.

The Chayei Odom, Klal 131:13 (1748 -1820) brings that the Gra ended the practice of decorating with trees on Shavuos since it is Chukos Hagoyim as this is how the Goyim celebrate their holidays. He does not cite any authority which says otherwise.

In Chochmas Odom Klal 89:1 he improvises a bit more, based on Tosafos. Meaning, even if a practice originates in the Torah and the Gentiles get the idea from the Jews and imitate it, if it is turned into a practice of idolatry then it becomes forbidden. However, something which the Gentiles imitate but only as a hevel or shtus but not as a

Notwithstanding the strong views of the Gra and Chayei Odom, many great Poskim took a different angle and were not concerned with the issue of Chukos Hagoyim at all.

The Elyah Rabah in his Peirsuh on the Levush, brings the custom of erecting trees and does not even mention any opposing views.

Elyah Rabah does not cite any view which would be oppositional to this custom of adorning shuls with greenery. So, either there was no such concern of Chukos Hagoyim with regards to greenery on Shavuos before the period of the Gra, or even if there was Elyah Rabah was not concerned about it enough to even mention it.

It is also interesting to note that whereas the Targum Shaini mentions flowers and apples, the Rema only mentions grasses (asavim.)

Those communities who celebrate with flowers would seem to be following the minhag as mentioned by Targum Shaini.

The communities which celebrate with sweet-smelling greenery and/or flowers would be in line with the Gemara, Shabbos 89B that it commemorates the fact that for every word that came out from G-d’s mouth at Sinai the whole world became filled with the fragrance of sweet-smelling spices.

Those communities which celebrate with grass but not trees would be in line with Mishna Berura’s understanding of the Gra that he only ended the practice of decorating with trees.

Those communities which do not adorn with grass or trees at all would be in line with the Aruch Hashulchan and Chayei Odom’s understanding of the Gra that he ended decorating with all greenery.

The Maharsham, Daas Torah 494 (1835-1911) cites the Rivash, Siman 158 (1326-1408) who was questioned about whether going to a cemetery to visit every day of shiva is an issue of Chukos Hagoyim, since it was an Arab practice. The Rivash rules that any practice of the Goyim which is not done as a religious reason, but for some other reason, is not considered Chukos Hagoyim. The Goyim did not have this practice as a religious practice per se, rather as a way of showing respect to the dead. Hence; it does not become Chukos Hagoyim. Maharsham also cites the work of the Yoisef Daas who proclaims, “The minhag of the Jewish people erecting trees on

Shavuos is Torah.” Maharsham then points out that the Goyim put the trees outside as well, whereas we only put them inside.

The Maharsham lived shortly after the Gra from 1835-1911 and was aware of the Gra’s position. However, his response was that the Goyim put their trees outside and we do it inside.

So, it is not a problem of Chukos Hagoyim.

The Shulchan Aruch Harav O.C. 494 (1745 -1812) was a contemporary of the Gra and was also not concerned about the Chukos Hagoyim issue. He brings the view of Mogain Avrohom that the custom to erect trees on Shavuos serves as a reminder to daven for the trees and the fruits. He does not mention the opposition of the Gra not that there is any concern of Chukos Hagoyim.

It is reported that the Chasom Sofer, who lived from 1762-1839 and was also a contemporary of the Gra, had his shul decorated with all types of greenery and was not concerned about Chukos Hagoyim.

Reb Moshe Feinstein (1895-1986) is quoted in a teshuva (which was published after he was niftar, Igros Moshe Chelek 8, Y.D. 11) that brings this Maharsham that it’s not a problem of Chukos Hagoyim; since we do it not to imitate the Goyim but to remind us that we are being judged on the trees on Shavuos.

Furthermore, the Goyim erect trees outside and we do it inside. However, Reb Moshe holds that it is in fact a problem of Chukos Hagoyim and therefore should not be done, in line with the Gra and Aruch Hashulchan.

(This is likely an authentic teshuva as Reb Moshe Feinstein was known to follow the customs of the Gra.)

had the custom in Eretz Yisroel not to decorate with greenery.

Reb Shlomo Zalman Aurbach (1910 -1995) is reported to have upheld the minhag of adorning shuls with greenery and that he held it was not a problem of Chukos Hagoyim.

The Chidah brings the source for the minhag from the Targum Shaini, Megillas Esther Chapter 3 that Haman related to Achashveirosh that the Jewish people have a custom of gathering up flowers and apples on Shavuos, and saying this is the day that the Torah was given to our forefathers at Sinai. Now, although we don’t normally glean Halacha from a Medrash, that is only if the Medrash contradicts the Gemara in which case we defer to the Gemara. But where the Medrash does not contradict any Gemara, such as in our case, then we do in fact derive practical Halacha from the Medrash.

On a side note, this is not the only Halacha that we derive from

Tosafos, Avodah Zara 33b says we also learn another Halacha in

Taaruvos from this discussion. Haman relayed to Achashveirosh that if a bug falls into a cup of liquid that the Jews throw out the fly and drink the liquid. Whereas if the king, or any other Goy, touches a cup of wine then the Jews insert it into the ground 3 times, or they rinse off the cup three times. From here is where the Halacha is derived that if some cold traif is discovered in a vessel, that you rinse the vessel 3 times in order to kasher it.

R’ Ovadya Yosef brings a number of Poskim who were not concerned with the Chukos Hagoyim issue, in addition to Maharsham and Yoisef Daas.

‘The Minhag of Yisroel is Torah.”

As there are many opinions on both sides of the spectrum, for a final ruling a Halachic authority must be consulted.

Wishing Everyone A Chag Sameach!