September 11 Memorial Opens To The Public 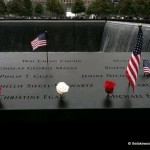 PHOTOS: The National September 11 Memorial opens to the public Monday — a decade and a day after terror attacks brought down the twin towers of the World Trade Center in lower Manhattan. The memorial opened a day early on Sunday only to victims’ family members and those attending the commemoration service at ground zero.

The finished plaza is a calm spot in the midst of a busy construction zone for 1 World Trade Center — the new skyscraper rising above the site.

The focal points of the memorial are a pair of granite reflecting pools — “voids,” as designer Michael Arad calls them — that plunge into the earth.

Located on the footprints of the old twin towers, they are open-topped cubes, nearly an acre in size. Their walls are clad in dark granite, surrounded by brass parapets engraved with nearly 3,000 names: those killed on September 11, 2001, in New York, Washington and Shanksville, Pennsylvania, as well as in a 1993 attack on the World Trade Center.

The largest man-made waterfalls in North America wash over the dark granite, flowing from beneath the etched names into the pools below.

The National September 11 Museum is nearing completion at the site and will open next year. Three more office towers are in various states of development.

In the coming years, a transportation hub and shopping arcade will connect the complex underground. The entire project is expected to be completed around 2015. CNN/TLS.