Sen. Stephen Sweeney Sworn In As N.J. Senate president, Making Him The Second Most Powerful Leader In NJ Government 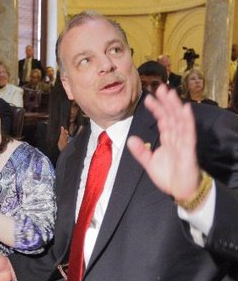 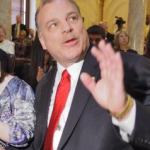 Sen. Stephen Sweeney was sworn in as Senate president today, making him the second most powerful leader in New Jersey government and the highest-ranking official in the Democratic party. Sweeney, 50, replaces Sen. Richard Codey, 63, who he ousted in a sweeping political power play. In his first remarks after taking the oath of office, Sweeney vowed to prioritize fiscal responsibility and economic growth. “The state needs a total makeover,” he said. The Senate president, responsible for steering legislation and enforcing party discipline, controls which bills and appointments reach the chamber for a vote. Codey (D-Essex) lost control of the Senate presidency in the fall when Democrats, including key senators from North Jersey, backed Sweeney (D-Gloucester).

Sen. Nicholas Scutari (D-Union) was one of the lawmakers who backed Sweeney.

“He’s an aggressive agent for change,” he said. “We need that.”

Sweeney was officially nominated by a vote of the 23-member Democratic caucus in November, while all 17 Republican senators backed Sen. Tom Kean (R-Union).

When the vote was announced, Sweeney’s daughter wrapped her arms around him and planted a kiss on his cheek while senators gave him a standing ovation. Star Ledger.