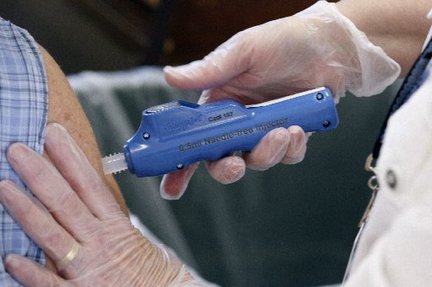 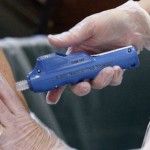 Belonephobics rejoice. Folks with a fear of needles now have the alternative of “needle-free injections” at some seasonal flu clinics in New Jersey. The new devices send high-speed jets of fluid into the skin instead of the flesh-piercing long needles that have been the bane of many a doctor visit. Despite having administered lots of shots over the years, retired nurse Ellen Petrone of Andover Township is no fan of needles when she’s on the receiving end.

So when she got her seasonal flu shot at a senior center in Sussex County and was given a choice between a regular needle and a needle-free injection, it wasn’t a hard decision.

“That wasn’t bad at all,” Petrone said after receiving the needle-free injection. “I kind of tense up when I know there’s a needle coming. This way — needle free — I’m happy.”

Sussex County and Vineland, in Cumberland County, recently became the first areas in New Jersey to offer needle-free seasonal flu shots with handheld devices made by a Colorado-based firm called PharmaJet. The firm received federal Food and Drug Administration approval in March to market the injector in the United States, and the devices also have been used in Colorado and Oregon, company spokeswoman Anne Kalin said.

Bulky, gun-like needle-free injectors date back to the 1940s, but began to fall out of favor in the late 1970s after concerns about contamination. Today’s version, with disposable tips, is leaner and cleaner.

So far in New Jersey, needle-free injections have been used only for inoculations against seasonal flu. But some counties are contemplating having them available for swine flu vaccinations.

That’s because a pandemic flu outbreak would require mass vaccinations to be given quickly by a limited number of health care workers, and needle-free injectors have been used successfully worldwide to administer tens of millions of doses of influenza, smallpox, meningitis and many other vaccinations rapidly.

Needle-free injectors can be administered more quickly than needles, and reduce the dangers accidental needle sticks to health workers, reuse or misuse of nonsterile needles and hazardous sharp medical waste.

Meanwhile, to inoculate against the H1N1 or “swine flu,” state health officials have ordered a different needle-free vaccine option — the FluMist nasal flu vaccine spray. Shipments of the spray from the federal Centers for Disease Control and Prevention to states could begin as early as this week.

“Parents like to have this option for their children,” said Pat Pignatelli, health officer in Lincoln Park, which has been offering FluMist to residents for the past five years.

Last month, clinics in Sparta, Sussex Borough and Andover Borough each had dozens of people choose the needle-free shots, or about one-third of each crowd, said Michelle Roth, a public health nurse with the Sussex County Health Department.

Barbara Moore, a 25-year nurse veteran who administered flu shots in Andover, said of needle-free shots: “There are people who are terribly afraid of needles. Just the thought would scare people from getting their shots. Anything we can do to get people vaccinated, it’s a new option, so it’s good.”

Several people who tried the needle-free shots at the senior gave them a thumbs up.

“You don’t feel much of anything, a quick little pinprick,” said Hopatcong Police Chief John Swanson, who received a needle-free shot on Sept. 15, said. “By the time you realize you felt something, it’s gone. … It was definitely an improvement over the needle.” Star Ledger.