Residents Speak Out After PD Tows Vehicles At BMG 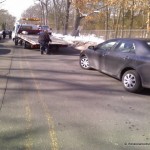 (VIDEO) As reported here on Monday, the Police Department towed approximately 15 vehicles near BMG, claiming they were extended too far into the roadway-due to the snowbank. The incident sparked outrage-not only from those whose vehicles were towed-but from neighbors and friends of the ‘victims’. At the Township Committee meeting last night, a neighbor, as well as an owner of one of the towed vehicles voiced their disappointment to the Committee. The neighbor explained to the Committee how he had offered to assist with traffic until the students were done learning,
in order to save them the hassle of being towed, but the Officer refused, saying it is illegal. The vehicle owner said, that not only did he receive a Summons for being parked illegally, but he was charged $250 for the impound, which included an additional overnight fee being that it was a Holiday and they were not open to return his vehicle. Deputy Mayor Menashe Miller, visibly upset at that immediatley responded, that anyone whose vehicle was towed should be able to get it back even if it’s a Weekend or Holiday, “I will personally be on top of it with the Chief” he said.