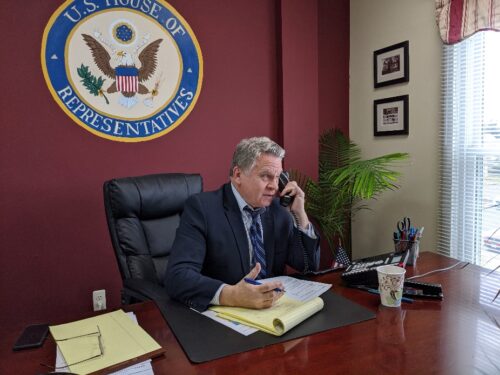 Rep. Chris Smith has received the coveted backing of the top 3 Republicans in the House of Representatives – Kevin McCarthy, Steve Scalise, and Elise Stefanik – with the trio endorsing him for reelection in 2022.

In a statement, McCarthy called Smith “a bold and effective legislator” who “demands accountability from China, protects our national borders and sovereignty, and tirelessly works to identify solutions for autism and Alzheimer’s disease.”

Scalise called him “a true fighter” who is “a tenacious advocate for unborn children and the rights of humanity.”

Echoing the other top Republicans, Stefanik said Smith is a “trailblazer who has led the way in protecting women and children in the U.S. and around the globe from the heinous crime of human trafficking. He has also created significant programs for our Nation’s veterans, families faced with autism, and seniors struggling with Alzheimer’s.”

Just after Smith was endorsed by Republican leadership, another challenger entered the primary race against Smith. 27-year-old far-right podcaster Mike Crispi will challenge the long-serving Congressman for his seat. Roger Stone, a Trump confidant who spent time in jail for making false statements, witness tampering, and obstruction, will lead Crispi’s campaign.

Smith has served New Jersey’s 4 District – which includes Lakewood – in the House of Representatives since 1980, and has been widely lauded as one of the most sincere and easily accessible politicians in the United States who gets the job done without fanfare.