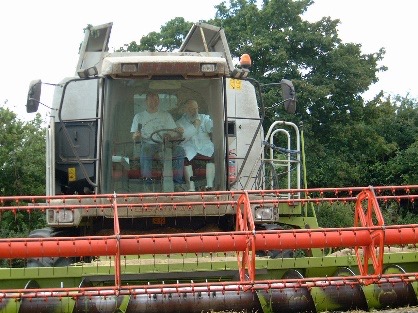 Somehow it was my great zechus to become a zanav l’aroyos – “a tail to lions” and in particular to the great lion the Ari Hagadol Dayan Ehrentreu zt”l.

It was undoubtably hashgacha pratis that Chief Rabbi Lord Jakobovits was at the last moment unable to perform my Induction as the Rav in the Beis Hamedrash Hagadol Synagogue in the city of Leeds, and Dayan Ehrentreu travelled up in his stead.

Next morning at 6am, I accompanied the Dayan to visit the local shechita to the great surprise of the local shochet and subsequently the three kosher butchers operating in town. I remember the Dayan looking pristine in the gleaming white coat, boots, and apron he had brought with him, immediately commanding respect and deference from staff and management alike. He didn’t merely check the chalafand stand aside to watch the shochet at work but plunged his arm with alacrity into the chest cavity of the animal to do the bedikas p’nim (internal examination) of the lungs and made various recommendations how the process—and the Kashrus—could be improved.

I’m not sure the London Beth Din had formal jurisdiction over the Leeds shechita but as the Dayan often said: Responsibility is not given, it is taken!

Before returning to London, he encouraged me to keep in touch: “Call me any time,” he told me, “Preferably after 11.00.” PM he meant!

The Dayan’s hands-on approach was evident in everything he did. When kashering a factory or a hotel for Pesach, he wouldn’t just stand by to rule on any shaalos, rather he would remove his frockcoat, roll up his sleeves and join theshomrim scrubbing and blow torching, and dunking keilim into boiling water.

Together with his many duties and responsibilities, the Dayan was a highly sought after mohel. Rabbi Alan Kimche recalls driving the Dayan to an appointment when the Dayan asked to stop for a moment at the house of a baby where he had carried out a bris earlier that day. The Dayan checked the baby and sensed that the mother was nervous about bathing the newly circumcised babe. The Dayan picked up the baby and marched to the bathroom. “Let me show you how to bath him,” putting the mother at ease and doing chesed in a real and practical way.

The Dayan was somewhat lemaalah min hazman, and able to pack into a day what most of us couldn’t do in a week.

I remember telling him about a difficult situation I was grappling with. “You want me to speak to him?” he asked his hand already on the receiver, “I’ll speak to him!” Within a minute he had resolved the matter and replaced the phone saying “Omer veOseh!” (paraphrasing the expression in Baruch She’amarprayer Shacharis)

The Dayan did everything with zerizus. I remember taking the Dayan to visit a factory. I parked the car, walked around to take remove my things, and then searched for the Dayan who had disappeared! In the short time I was getting my jacket and bag, he had already shot off into the factory! He was intensely practical; whilst I was still puzzling over a flowchart, he would grasp the factory with its tanks and reactors, myriad pipes, and steam condensate return, as he would a Talmudic sugya: the Mishna then the Gemara, the questions, the answers, the shitos of the Rishonimand the questions of the Acharonim.

His practical and hands-on approach came to the fore when it came to the construction ofeiruvim.

A year or so after the establishment of the North-West London eiruv, we were visited by a delegation of eiruvexperts from the Eidah Chareidis. They were impressed with our mechitzos, ourlechayayim, ourTsuros hapesachim, but above all they were impressed with … our Dayan! ”Your Dayan! Mamash gevultig!” they told me. “What’s so gevaldig?” I asked. “You come from Yerushalayim, ir shekulo Kohanim, a city of Talmidei Chachomim, Dayanim andPoskim. What’s so special about our Dayan?”  “We have great Talmidei Chachomim,” they said, “b’kiim in Shas uposkim, but they don’t come down ‘al hashetach’ (on-site).” We have to present theshaaleh to them. But to have aposek who climbs over fences and stands in the mud whilst being mefalpel in thep’shat in the Chazon Ish, seeing the issue with his own eyes⁠—lefi reos einei hadayan—that is something unique!

One of the Dayan’s outstanding achievements was undoubtably the establishment of the North-West London eiruv. Bemokom she’ato motsei geduloso, shom ato motsei anvesonuso! – Wherever you find His greatness, there you find His humility (Megilah 31a).

For 15 years the eiruv champions fought opposition on every front. With the local Council, with the Hampstead Garden Suburb Trust, with theEiruv Boundary Opponents Group as well with antagonists from various ends of the Jewish community, eventually winning planning permission at a government enquiry.

Under attack from all sides, the Dayan stood his ground, resolute and fearless; the eiruv would be built to the highest halachic standard and would carry hishechsher.

I was with him in his study one day when we first heard a rumour that Rav Elyashiv—world-renowned posek and Dayan Ehrentreu’s mentor—had come out against the London eiruv. He immediately told me: “If Rav Elyashiv is against it, I will have to back down. If my chaverimwant to do it without me that’s up to them but I can’t go against Rav Elyashiv!” I was bowled over by his incredible humility. Even though he was convinced he was right and had stood firm against all opposition, he was prepared to relinquish years of effort and argument rather than oppose the view of his Rebbe.

Fortunately, the rumour turned out to be unfounded, and today there are 14 eiruvim across the country, (actually 17, if one includes Westcliff, Canvey Island and Tottenham), thousands of people whose enhancedshemiras Shabbos and oneg Shabbos is entirely due to the Dayan’s courageous leadership.

At that time, I gained insight into a striking Mishna inPirkei Avos (6, 1) :

Rebbi Meir taught, Kol haosek beToroh Lishmo… Whoever engages in Torah for its own sake, merits many things: He is called Friend, Beloved, a lover of Hashem and a lover of mankind. … People benefit from his advice and wisdom, understanding and courage.  … It gives him sovereignty, dominion and discerning judgement. … He becomes modest and patientand forgives insults. It makes him great, exalting him above all things.

“Forgives insults”?! The man is surely a tzaddik, loved by Hashem and his fellow man! Who could possibly insult him?! Apparently, even tzaddikim it seems, are insulted by some. I’m reminded of the story of the revered Malbim walking with his talmidim and being subjected to the catcalls and insults of layabouts in the street. Malbim was known for his witty retorts, but he kept silent. Why don’t you respond his talmidim asked? Did we respond to the dogs who were barking at us earlier on? he replied. When the Mishna speaks of forgiving insults, the yapping of a barking dogs is not an insult. If it comes from a person of stature, then it’s an insult.

The Dayan received many such insults both regarding the eiruv and on other matters on which he took a stand. He never responded. He never looked to the right or the left. He taught us to do what is right, and not to worry what others may say.

Kol Ha’osek baTorah Lishmah… The breadth and depth of his torah was extraordinary. I always wondered when the Dayan found time to study in depth without disturbance. At the shiva I learnt it was apparently between 3 and 6am every night!

Nikra Raya, Ahuv: The Dayan was a friend to so many and indeed ‘Lover of Mankind’. His personal acts of chesed were legendary, as was the radiant smile and friendly greeting he bestowed on everyone, man and woman, Jew and non-Jew. Even in Burton-on-Trent at the Marmite factory the Dayan’s visit some years earlier would be fondly recalled. “How is the Dayan?” they asked me. “I always remember his words: The question of the wise man is more important than the answer” recalled St John Skelton the Marmite Master Blender! Wherever he went he created a Kiddush Hashem.

The Dayan was the embodiment of the Talmudic phrase Ma’an malkei Rabonon! Wherever he was and whatever he did he radiated majesty and nobility.

I remember how he encouraged the KLBD mashgichim at a kashrus conference citing the verse: Im katan ata beinecha, rosh leshivtei yisrael ata!)Shmuel, 1, 15). Do not think of yourself as small, you are the Head of the Tribes of Yisrael! You are theshluchim of the Beth Din and represent the Dayanim – he told them!

At the same time, he guided with gentleness and humility, often preceding his advice or psak with “You want my opinion?” As if to say, its only my opinion, it’s up to you to decide. Occasionally, he would say to me Aseh kechochmasecha – (Do as your own wisdom dictates) thereby by empowering me to act with the knowledge that he trusted my judgement.

May we long continue to be inspired by the Dayan’s wisdom and example: 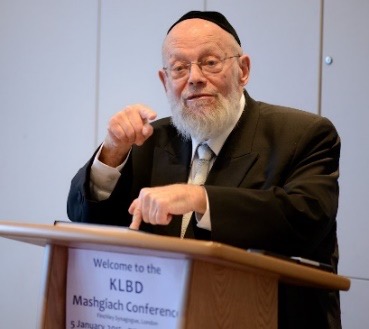 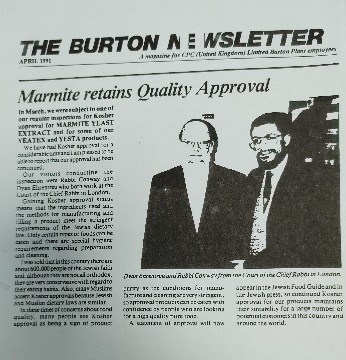 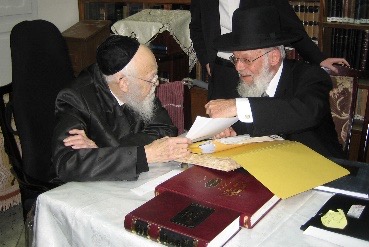 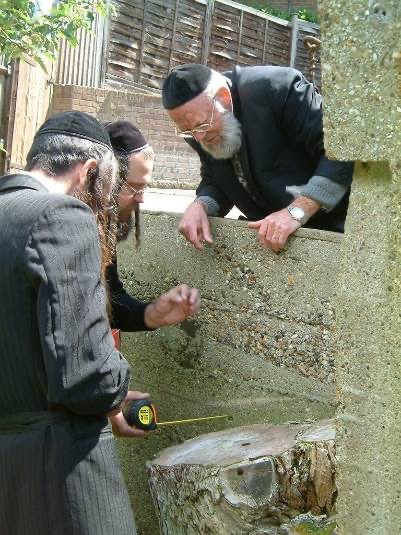 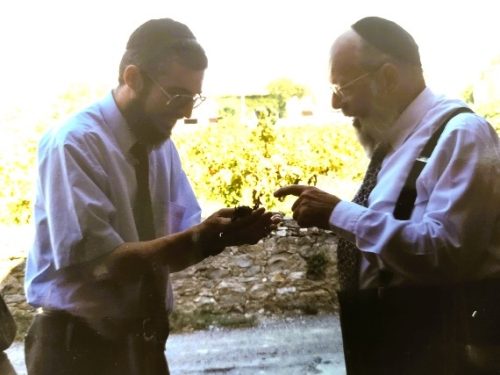 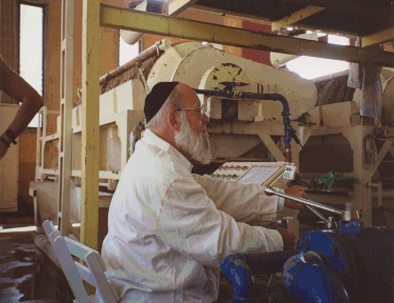