In June, TLS reported the Inspection Department was continuing its timed parking enforcement in the Downtown Lakewood – by marking tires and issuing warnings.

Now, real summonses are being issued.

One ticket-receiver was not happy about it, and was wondering who even issued the ticket.

During the warning period (pictured), Township Inspection Department Director Mike Saccamano told TLS the Department was cracking down in response to numerous complaints from Downtown store-owners.

So how do they know how long you were there for?

Chalk. Inspectors use chalk to mark the tires, and then return to see if the vehicle has moved in the allotted time. 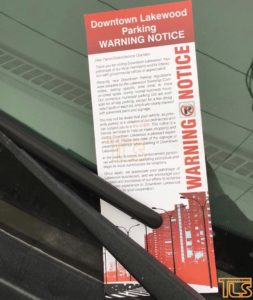 The Downtown area is defined as the area between Route 9 and Lexington Avenue, and between 5th Street and Main Street. The areas being monitored, says Saccamano, are the Municipal parking lots and area marked with timed parking – such as two or three-hour parking limits.

The fine for parking is $20. There is no court appearance required.