Reader-submitted: From Homeless to a Recovery Coach 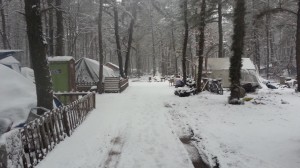 Submitted to TLS by Jessica Borner. Nestled away in the woods is a community of 65+ homeless individuals that live in tents, sharing one shower, with no electricity and no real plumbing for toilets, all with one goal – to find affordable housing. This might sound like the beginning of a 1950’s movie, but it isn’t. Instead, this is a modern-day quandary for these individuals who reside at the intersection of South Clover Street and Cedar Bridge Avenue in Lakewood, NJ, in a community called Tent City.

Stigma has it the homeless are criminals, drug addicts, or just lazy people who have no intention of holding a job and choose to be homeless. Is this true? Of course not! They are people that fell on hard times due to the economy, Hurricane Sandy victims, war veterans that were denied government assistance; as well as, some people with mental illness and addicts, who re having a hard time finding the help they need to get their feet back on the ground. They are people like you and I, who have lost everything due to a plethora of different reasons, and no two stories are the same. Yet, they all have one thing in common – they live outdoors in tents.

I had my own bout of homelessness in 2008. After a very hostile living environment, I ended up homeless, living in my van and various hotels in Ocean County. I had hardly any support from friends or family. Although I worked two jobs at the time, I still had a very hard time pulling myself out of that situation – with two kids, no child support and a van that was always breaking down. I had become depressed and hopeless.

He is such a friendly and helpful man, and it is very uplifting to be around him. He offered me a tent, food, and other basic necessities as well as a chance to be part of a community. That’s a lot to someone who has lost everything! Although I did not become a permanent resident of Tent City, my brief time there made things seem more bearable, and I started to see a light at the end of the tunnel.

It’s now six years later, and I have to say – my life, with hard work, has really come together. I work full-time in hospice and I’m ready to achieve a certificate as a Recovery Coach next month. I recently became involved in Tent City again, but this time as a volunteer. I had read something on Facebook a few months ago that this community needed batteries. Again, knowing what it’s like to have nothing, I went out and purchased them a car battery.

Upon pulling into Tent City for the first time in six years, I was shocked how the community grew from maybe 25-35 people in 2008, to 90+ in 2013. The homeless population is growing at a very fast and alarming rate in New Jersey. I decided to venture out and found even more areas where these encampments exist in Ocean County. It’s hard to believe that people, in this day and age, still live in tents – but they do. In my “off time” I engage in volunteering at different encampments and doing what I can to help this population.

Many of us live “paycheck to paycheck”, and are merely just a paycheck away from becoming homeless….