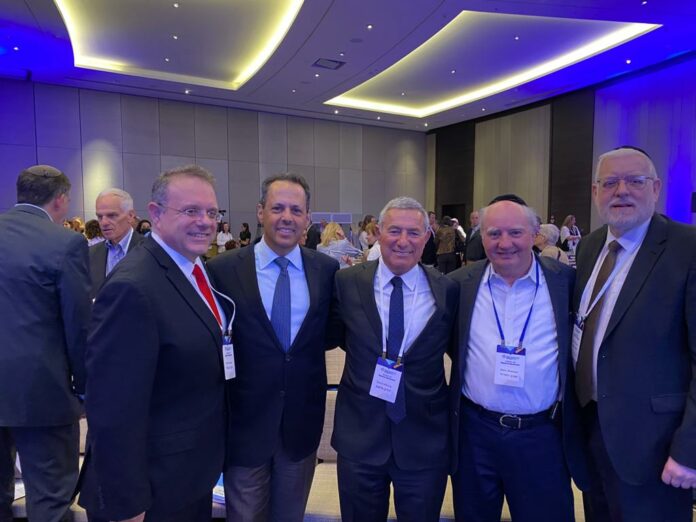 Thanks to the efforts of Rabbi Pesach Lerner, chairman of Eretz Hakodesh, the status quo at the Kosel Hamaarovi did not become the subject of a resolution by the board of governors of the JAFI-Jewish Agency for Israel, a powerful and influential international organization.

He attended a meeting yesterday, Tuesday, July 12, of 250 members of the executive board and the board of JAFI. The meeting was originally scheduled to express their indignation and anger after an incident that took place on June 30 at the Ezras Yisroel area at the Kosel set aside for egalitarian prayer. A small group of religious Jewish teens disturbed three “bnei mitzvot” ceremonies being held there.

The response from the Reform, Conservative and other liberal movements was fast and fierce, painting the Orthodox community with a broad brush and calling for wide-ranging changes to be made to the prayer setup at the Kosel, asking for the government to implement the Kotel Compromise Agreement that is currently on hold.

At the gathering Tuesday, the Jewish Agency board members expressed their desire, in response to the June 30 incident, to pass a resolution implementing those changes.

Rabbi Lerner, speaking on behalf of Eretz Hakodesh, standing as an individual against a group of many, was adamant that the Kosel’s status quo must remain, and that, while he condemned any and all violent confrontations, no changes can be made to compromise the kedusha of the Kosel.

Thanks to Rabbi Lerner’s strong position, the resolution to implement the Kosel Agreement was shelved. The Jewish Agency resolution that remained condemned the June 30 incident and called for a completely halt to all violence.

“The presence of Eretz Hakodesh enables us to have a voice,” Rabbi Lerner observed after the meeting. “It is so vital that we be able to have a seat at the table, so to speak, to ensure that the chareidi viewpoint is heard and that the arrangements currently in place at mekomos hakedoshim remain.”

Rabbi Lerner, who took the lead, was aided by others who assisted in making sure that the original anti-kedushas haKosel resolution never made it to the full board of governors. The Kosel agreement would give non-Orthodox streams official representation in the management of the Kosel and grant official status to the egalitarian section.

“This was historic,” said one of the Orthodox members of the board of governors. “The Orthodox voice had never been heard before at the JAFI. Kudos to Rabbi Lerner and Eretz Hakodesh for taking the lead.”