Q&A on America’s Response to Ebola 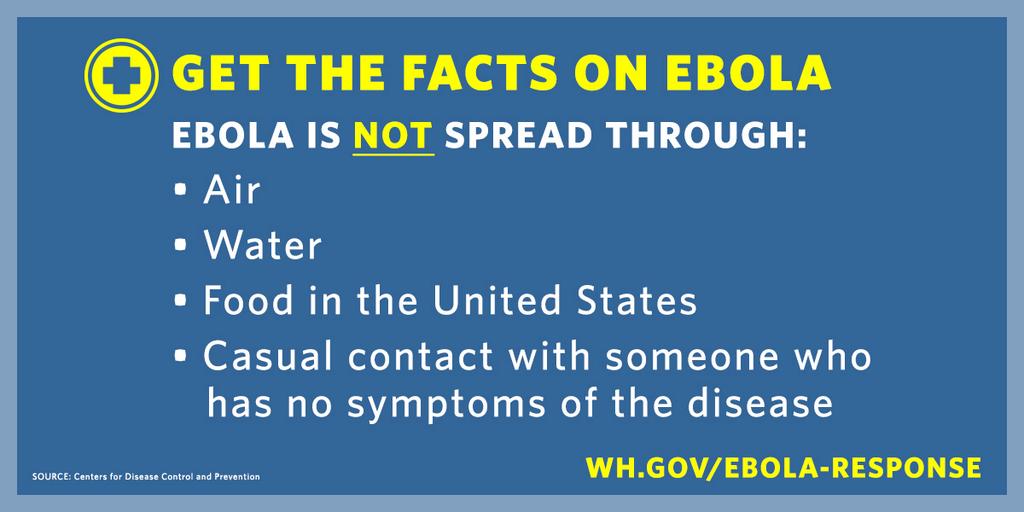 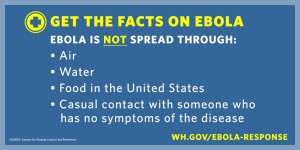 The White House: As the Ebola situation continues to develop both at home and abroad, President Obama’s first priority is doing everything possible to ensure the health and safety of the American people. At his direction, the Administration is taking an aggressive, whole-of-government approach to marshal all of our expertise and resources to detect, isolate and treat Ebola patients safely in the U.S., while working to stop the outbreak at the source in West Africa.

While the chances of a serious outbreak in America are very low, we are doing everything we can to ensure our hospitals and health care workers are fully prepared to effectively treat any cases of Ebola while protecting public safety.

Every American should know exactly what we’re doing right now to keep everyone safe. So here are a few answers to some questions that many may be asking when it comes to the U.S. response to Ebola:

Q: What do Americans need to know about Ebola, and does it pose a real threat to the United States?

A: The most important thing to know about Ebola is that it is not transmissible like the flu, and the risk of a widespread outbreak in the U.S. is extraordinarily low. Remember, as public health officials have said, you can only contract Ebola if you touch the blood or bodily fluids of a person who is sick with or has died from Ebola; if you touch contaminated objects, like needles; or if you touch infected animals. Specifically, only mammals (for example, humans, bats, monkeys, and apes) have shown the ability to become infected with and spread Ebola virus.

Ebola continues to be a public health and national security priority, and all of us in the administration continue to take aggressive measures to respond both at home and abroad. There is no country that is better prepared to confront the challenge Ebola poses than the United States.

Q: What has the Administration done so far to respond to the Ebola crisis?

A: The best way to protect the American people is to stop the Ebola outbreak at its source in West Africa. That is why we have surged resources to West Africa since the outbreak began earlier this year, while enhancing our preparedness here at home. In addition to the continued coordination across federal agencies and international partners that is part of our response efforts, here are a few more initial steps that are being taken at the President’s direction:

Q: Why hasn’t the President called for a travel ban from afflicted countries in West Africa?

A: Our top priority is the health and safety of the American people, and our key focus right now is reducing the risk of public exposure to the Ebola virus. That’s why, right now, travelers from those countries are subjected to screening prior to departure from West Africa. They are also subjected to additional, enhanced screening upon arrival in one of the five major U.S. air hubs that receive 94% of travelers to the United States from the affected countries.

The President has made clear that he will not hesitate to do what is necessary to maximize the chances that we avoid an outbreak here in the United States. But as public health and medical experts have said, a travel ban is less effective than the measures we currently have in place, including screening passengers. Imposing a ban would give travelers an incentive to evade detection, conceal their travel history, and therefore, make it much harder for us to ensure they are screened before they enter the U.S.

So while a travel ban may sound like a good idea, it could actually make the most effective and necessary protocols much harder to enforce.

The only way we can truly eliminate the risk of Ebola to the American people is to stop the outbreak at its source. That means we need to surge resources to West Africa – imposing a travel ban would only make it more difficult to move critically needed personnel and supplies to the countries that need it most.

Go here to learn more about the airport screening protocols that are currently in place to help stop the spread of Ebola.

Q: Who is the Ebola Response Coordinator and what will he be doing?

A: The President has asked Ron Klain to coordinate the Administration’s whole-of-government response to Ebola. As a former chief of staff to two Vice Presidents, Klain has extensive managerial experience and has taken a lead role in coordinating large, complex efforts – including helping to oversee the implementation of the Recovery Act, a major interagency and intergovernmental project. He will report directly to the President’s Homeland Security Advisor Lisa Monaco and his National Security Advisor Susan Rice in his work on our coordinated efforts to detect, isolate, and treat Ebola patients while protecting public safety.

As the President said, Monaco, Rice, Dr. Frieden and others have done outstanding work in confronting this challenge so far, and Klain will provide additional resources and bandwidth to enhance the government’s Ebola response.

Q: What is the Executive Order that the President just issued about the National Guard?

A: The President signed an executive order that authorizes the activation of Reserve Component personnel as part of the U.S. military’s humanitarian assistance and consequence management support related to the Ebola virus outbreak in West Africa. These reservists are being mobilized for deployment in support of Operation United Assistance. They are members of an engineering unit with specialized skills that will augment the active-duty force in our operations there.