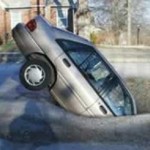 Potholes are largely a seasonal driving hazard but the problem is worse than usual this winter and it’s a reflection of how harsh this winter has been with its record snowfall and wide fluctuations in temperatures. Moisture from rain and melting snow and ice seeps into cracks in the asphalt and the contractions from freezing and thawing causes the pavement to break up. Vibrations from heavy trucks used to clear heavy, wet snow left by five winter storms can also cause potholes to grow bigger. Throw in the use of tons of salt on roads that may be good for de-icing, but corrodes paved surfaces, and voila.

Frank Somes, supervisor of roads and bridges for the Burlington County Highway Department, said, “The way the roads are breaking up right now with this weather pattern, we’re going to be very busy this spring, filling potholes and cutting out bad sections and repaving.”

“I’ve driven state roads, county roads and township roads and we’re all in the same boat looks like. This winter season is really causing havoc on road surfaces this year,” he added.

And the agency allots $3 million each year for pothole repairs and is waiting to see if it needs to funnel more money from its maintenance and operations budget in the wake of this year’s harsh winter.

“If we see an inordinate amount of potholes because of this crazy winter we’re having, we’re not just going to leaves potholes on the roadway,” Greeley said. Read full article in APP