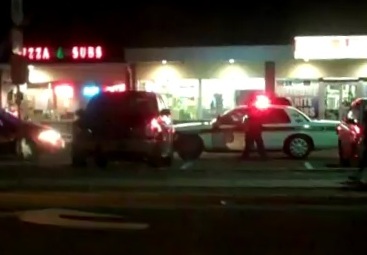 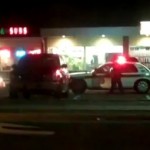 VIDEO: A man suspected of drinking and driving, was caught on video swerving his way to a liquor store, and then pulled over by police. Shimon Gifter, who caught the incident on video, tells TLS he was driving into Lakewood via Squankum Road, when he noticed the vehicle in front of him swerving in and out of oncoming traffic.

Believing it was a drunk driver, he called police.

Several miles later, Howell Police caught up with the driver as he was pulling out of a parking space after purchasing liquor at the Wawa shopping plaza. (Watch red van pull out of space).

TLS spoke with Sergeant Weg of the Howell Police who said they received a call for an erratic driver through 911, and after making contact with the driver – who began his alleged offense in Howell – they handed over the investigation to the Lakewood Police.

However, Lakewood Police say that they don’t have any record of a DWI arrest at that call, which indicates the driver was just distracted one way or another, possibly by texting while driving.

Lakewood Police did say however, that they arrested a DWI driver a short time later on Kennedy Boulevard, and impounded his vehicle. TLS/Shimon Gifter.