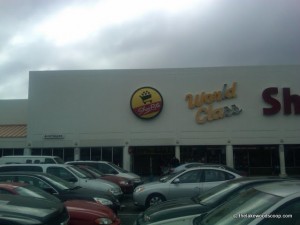 A shoplifter at Shoprite was apprehended following a struggle with police officer, Dsgt. Greg Staffordsmith says. At about 7:15 PM yesterday, Officer McKee was speaking to a female who was believed to involved in a shoplifting incident at the Shoprite in Lakewood.

As a result the female, 29 year old Kimberly White of Lakewood, was found to be concealing several stolen health and beauty products.

While attempting to place White under arrest she began assaulting Officer McKee. After a brief struggle she was apprehended.

Officer McKee sustained several scratches to his face during the encounter.

Kimberly White was charged with Shoplifting, Aggravated Assault on a Police Officer, Resisting Arrest and Robbery. Bail was set at $7,500 without a 10% option. [TLS