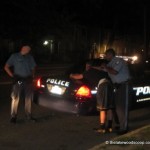 Police just arrested two men caught breaking into vehicles, sources tell TLS. At about 9:45 PM, Police received a call from a resident in the Park and 4th area after he witnessed a man breaking into his vehicle. Several officers responded to the area and found two men burglarizing vehicles.

At least one vehicle reportedly had its window broken.

The men were found to be in possession of a GPS and other items apparently stolen from the vehicles and were subsequently taken into custody. TLS-62/TLS-CCP.