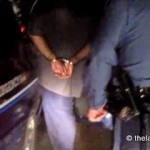 Police just arrested a man who conned Lakewood residents out of money this evening. At about 11:00 PM, a resident from the Raintree area called police after a man claiming to be an employee for the Ocean County Garage, knocked on his door asking for money to prevent his car from being impounded, the resident tells TLS.

The man, a white male about 30 years old, told residents his vehicle was being impounded by police and would need cash immediately to avoid having his car impounded.

Convinced of his story, the resident offered the man a check, but he insisted he needed cash. The woman gave the man $20 cash.

The same incident occurred with at least one other area resident.

Police arrived within minutes, and with the help of a neighbor, were provided with a description of the suspect’s vehicle. The vehicle  – with the suspect inside – was located just outside one of the homes the suspect conned.

After questioning the man – and his information and given name matching the information given to police by neighborhood residents – the man was arrested an taken into custody.

“I was extremely impressed by how quickly the police tracked down the con man”, says N.M., one of the Raintree residents conned by the suspect. “They combed the area and had him arrested within 15 minutes”. TLS-CCP.