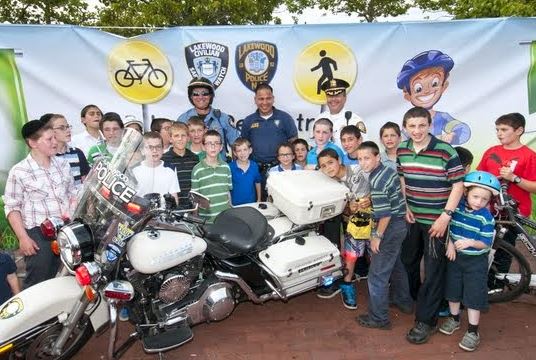 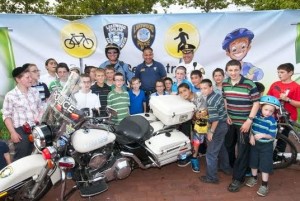 PHOTOS: LCSW: In total, police estimates place the total of attendees at an astounding 6,000, and the children kept coming. The lines for bike registration snaked around the square.

The free ices meant to last throughout the evening ran out in the first few moments and had to be replenished several times. And the children, adults and families just kept coming.

Nothing could have possibly prepared the organizers of LCSW’s first ever Bike Registration and Safety Event for the sheer volume of children and their families who chose to come out on a beautiful summer afternoon to make safety their priority.

By 3:30 pm, a full half-hour before the 4:00 starting time, bikes and their bearers began descending upon Town Square in Lakewood, where the free event, held by LCSW in conjunction with the Lakewood Police Department and Rothenberg Law Firm, took place.

What characterized the event were not merely the giveaways and the activities, of which there were plenty. It was the energy and the enthusiasm that captivated the crowd, vendors, participants and volunteers alike. The enthusiastic turnout from the community set the tone for a charged, exciting atmosphere, where attendees felt like they were part of something truly great. As Town Square filled with Lakewood’s young population, on the doorstep of the Lakewood Police Department, the event took on new dimensions not anticipated even by the creators and organizers of the event.

While children waited on line, they were able to access the giveaways constantly distributed, listen to safety tips constantly broadcast from the stage and interact with the police officers, elected officials, crossing guards and LCSW members circulating throughout the crowd.

It was a special opportunity for children and adults alike to get to know some of their public servants, and the officers themselves thoroughly appreciated the opportunity to meet some of their youngest admirers in a relaxed and enjoyable atmosphere as they gave over safety messages and discussed safety issues and concerns, adding to the atmosphere of safety consciousness the event was designed to achieve.

The vendors and sponsors were amazed by the deluge of visitors to their booths, as they expressed their admiration for the community’s response and their appreciation at being a vital part of so significant an endeavor.

Digital Bundle owners, so impressed by the magnitude of the event, approached LCSW coordinators to pledge gift certificates for every LCSW member and junior member involved in the planning and execution of the event.

The Sheriff’s Department representatives, who are accustomed to doing this throughout the year, and who have in fact been to Lakewood so many times, walked away feeling impressed, amazed and excited to have been a part of this. They left much later than originally planned, because they couldn’t tear themselves away from the crowd of eager and grateful children.

At a quarter to ten, forty-five minutes after the event was supposed to have ended, bikes were still going through registration and Town Square was still humming with activity.

So many unexpected benefits were engendered by the event, including the community relations interactions between various local departments and the citizens of Lakewood, the pride and personal responsibility children attained in terms of maintaining their personal property and staying safe and the demonstrations of support by community members of the amazing work that LCSW performs every day, 24 hours a day.

LCSW Volunteers did an incredible job of manning the booths, controlling the crowds and creating the atmosphere of excitement and action that permeated the Square for the duration of the event.

The Lakewood Police Department and Township officials pitched in with an impressive presence, highlighting the common goal and unified effort between agencies to promote safety in Lakewood as a top priority.

Mayor Menashe Miller was unable to attend as he is currently deployed, but he sent his support and continues to stand behind LCSW and all its endeavors.

Deputy Mayor Isaac Akerman interacted with the crowd while his son and friends volunteered at the event. The deputy mayor set the tone for his family and neighbors on how vital safety is and the effort he invests in encouraging it.

Township committeeman, Hatzolah member and emergency liaison Meir Lichtenstein attended the event as well, addressing the crowd from the stage.

Ocean County Sheriff Michael Mastronardy’s presence was an exciting attraction, as he met with local families and expressed his appreciation for LCSW’s work.

Participants took the opportunity to register their bikes with the LCSW volunteers on hand, who inputted their information in a sophisticated computer program written especially for the occasion. The police department will utilize the program to keep records of every registered bike, facilitating the recovery of lost and stolen bikes.

The Ocean County Sheriff Department officers gave Child ID cards to the long lines of children patiently awaiting their turn to be photographed and then receive their cards.

Bike Blade and Ball representatives tested the tire pressure of bikes, helped children fit and purchase helmets and sold a plethora of bike and safety related products at discounted prices.

Digital Bundle distributed free camera cases to every child, in addition to raffling off an electric Razor scooter.

Free tickets were distributed to every attendee, who then had a chance to win one of many prizes raffled off throughout the evening, ranging from two bikes, one from LCSW and one from Multicomm solutions, to roller blades, safety apparatus and more.

Hungry participants were able to purchase Bonky’s water ices, in addition to other refreshments.

As the event slowly drew to an end, Lakewood residents young and old, from every corner of town, reluctantly mounted their bikes to return home, enriched, inspired and informed.

LCSW appreciates the public’s cooperation in dealing with the overwhelming turnout with patience and grace and thanks every sponsor, vendor volunteer and participant who helped make this event such an unbelievable, unprecedented and unparalleled success.