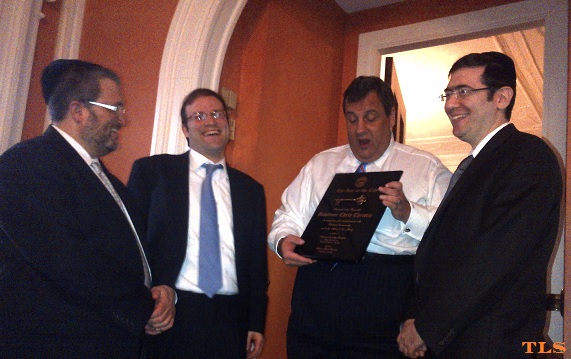 PHOTOS: Governor Christie this morning hosted a breakfast reception for Lakewood community leaders at his Drumthwacket Mansion in Princeton, NJ.

Mayor Akerman, Committeeman Miller and Committeeman Lichetenstein and about thirty community leaders took part in the breakfast, which began at about 8AM this morning.

During the breakfast, the Governor spoke to the crowd about his visits to Lakewood, his recent trip to Israel, and about his support for the Jewish community’s standpoint in same-gender marriage among other issues.

The Governor also thanked the audience for the support the Lakewood community showed for the Governor during his first run for office three years ago.

Following his short address, the Governor fielded questions from the audience.

The event concluded with Mayor Akerman presenting the Governor with a plaque containing a ‘key to the Township’ – the first such key the Governor ever received. TLS.