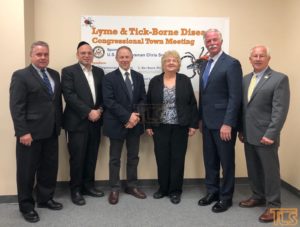 “More must be done to mitigate and over time eradicate this catastrophic disease,” said Smith. “That’s why we meet tonight. To enhance our understanding of the huge risk posed by Lyme and other tick-borne diseases while pursuing sustainable solutions.”

Smith, founder and co-chair of the Congressional Lyme Disease Caucus, has authored more than a dozen comprehensive bills on fighting Lyme disease, focusing on the need for a national strategy on Lyme which includes more accurate prevalence studies, better diagnostic testing, and more effective prevention and treatment.

“At the core of each bill was the establishment of an advisory commission or working group that would include Lyme-literate physicians, researchers and patients—a group of people who have been systematically excluded for years from the policy debate,” Smith said.

Pat Smith, President of the Lyme Disease Association, was one of the speakers at the town meeting. She is a member of the new HHS Tick-Borne Disease Working Group, created by legislation Rep. Smith helped shepherd into law, the 21st Century Cures Act. 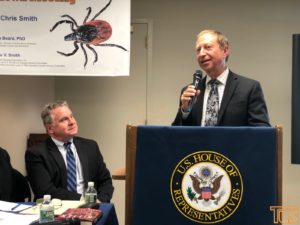 “From 1990-2017, NJ had 77,259 cases of Lyme reported by CDC−so 772,590 actual cases probably occurred due to the under-reporting factor. In 2017, NJ was 3rd in US in case numbers with 5,092 reported cases (50,920 actual), 12% of all cases in the US,” Pat Smith stated. “There are ~ 20 tick-borne diseases and conditions in the US−every state is affected by some tick-borne diseases. One tick bite can cause more than one disease. The deer tick alone can carry/transmit about 10 different pathogens depending on where it is found in the US. The invasive longhorned tick discovered in NJ two years ago has already been found in 10 other states, but scientists do not yet know what diseases it transmits in the US.”

“Can we escape ticks? I don’t think so, ticks are even found on islands in the Subantarctic region just North of the Antarctic Circle−ticks found through PCR to be carrying the bacteria that causes Lyme disease, and penguins there have developed antibodies to the bacteria,” Pat Smith stated.

Also on the expert panel were Dr. Ben Beard, deputy director of the Division on Vector-Borne Diseases at the U.S. Centers for Disease Control, and Dr. Richard I. Horowitz, MD, an internist in Hyde Park, NY. 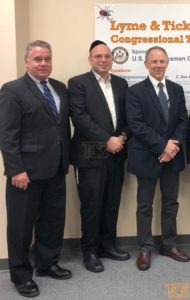 Dr. Beard said how the total number of reported cases of tick-borne disease was around 60,000 in 2018, but that “We’ve known for quite a few years that Lyme disease cases are underreported.”

“For every one case of Lyme disease that’s reported, there’s probably 10 or 12 that are not reported,” Dr. Beard stated.

“I’m hoping that the future of medicine—and this is really where medicine wants to go—is shift the paradigm to a personalized, precision multifactorial model, in other words, ‘no two patients are treated the same, that’s why guidelines don’t work’,” Dr. Horowitz said.

“The 16-point MSIDS model, by going through it piece-by-piece, you can get to the cause of a lot of the patient’s problems,” Horowitz said.