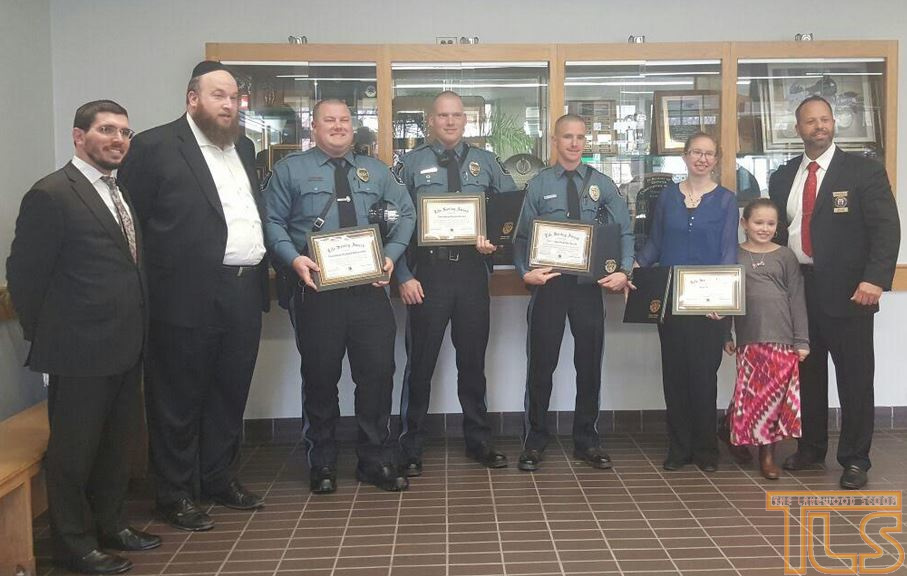 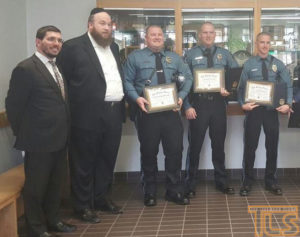 Today, Chaplains Yisroel Bursztyn and Yaakov Wenger of the New Jersey Chaplains Association, honored Howell Police officers, as well as a police dispatcher, with a lifesaving award for saving the life of a suicidal man.

On October 16, 2016 at approximately 9pm, Howell Township police officers Richard Robertiello #652, Nicholas Austin #654 and Daniel Bozza #671 responded to the area of Aldrich School, 615 Aldrich Rd., for a report of a missing/suicidal person. From text messages being sent by the distressed individual, family members and friends had reason to believe the individual would be at this location to commit suicide so they responded there as they contacted the police. Upon arrival, the suicidal person’s vehicle was located, unoccupied.

Ptl. Robertiello, Austin and Bozza began scouring the area searching for the suicidal person, who was described as a twenty-one year old male. They searched near the school, surrounding fields and neighboring residential areas. The officers then ran through the wooded area near Aldrich School searching for the individual. It was dark making visibility poor and forcing officers to search the wooded area with flashlights. Ptl. Robertiello promptly located the individual, who was more than a hundred feet into the woods. The individual was hanging from a tree with a rope tied around his neck and his feet a foot off the ground. The individual was unconscious.

Ptl. Robertiello called for help at his exact location. Ptl. Austin and Bozza ran through the woods to provide assistance. Ptl. Austin and Bozza held the individual up to provide slack in the rope and release pressure from his neck while Ptl. Robertiello cut the rope. The officers provided immediate first –aid and the individual regained consciousness. He was transported to the hospital for treatment and did not suffer any life-threatening injuries thanks to the help of caring family members and friends who contacted police and diligent efforts by all officers and police dispatchers involved. 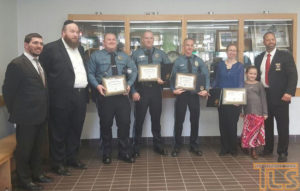 Chief Kudrick stated, “The quick and decisive actions by our patrol officers as well as the telecommunicators who coordinated the response are directly responsible for saving this young man’s life. Any delay or misstep during that call would have resulted in an opposite and sad ending. Lives would have been entirely changed forever. I’m proud of my personnel however, I’m not surprised. They are highly competent and professional. We wish this young man and his family all the best in their recovery. We are here if you need us.”