PHOTO: Man Thanks Manchester Officers for Saving His Life 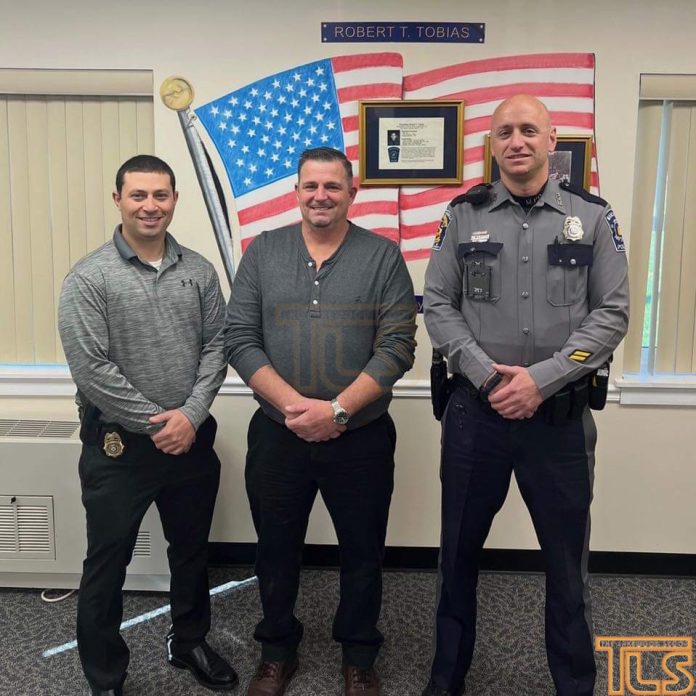 Today, Dale Dexter came to Manchester Police Headquarters to meet, in-person the two officers, he credits with saving his life following a heroin induced overdose at approximately 6:29 a.m., on February 10, 2016.

The officers who responded to the scene and rendered aid were Ptl. Michael Guarino, now Det. Guarino and Ptl. Jason Wiener. Upon arrival, they found Mr. Dexter to be unresponsive, with a low pulse rate, and shallow breathing. Upon assessment of Mr. Dexter’s condition, the officers immediately performed life-saving measures to include the administration of Naloxone (Narcan). Shortly after the administration of Naloxone, members of Manchester First Aid (Squad 29)/ Paramedics arrived and assumed ongoing care for Mr. Dexter who ultimately survived.

While at Manchester Police headquarters, Mr. Dexter met Det. Guarino and Ptl. Wiener in the Police Department’s briefing room in the presence of other members of the Manchester Police Department. Mr. Dexter shook their hands, expressing sincere gratitude for saving his life. He stated, “Without these two gentlemen, I would not be standing here today and my life would not be as amazing as it is today. It helped me change my life and I couldn’t be more grateful to them.”

Mr. Dexter explained that the day he overdosed marked a turning point in his life and proudly stated that he had been clean for over five years. He indicated that one of his life’s goals is to help as many people as he can, and to give back to the community from which he admittedly had taken from for many years. One way he is working toward meeting that goal is through volunteer efforts with the Toms River based, Hope Sheds Light organization where he has been involved as a certified peer recovery specialist.

The Manchester Police Department thanks Mr. Dexter for taking to time to acknowledge the officers for their distinguished efforts and wish him the best in the future.