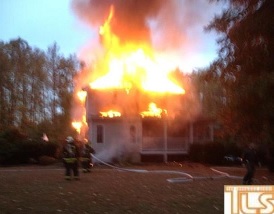 PHOTOS: The Lakewood Fire Department was called in for mutual aid to help the Howell Township battle a fully engulfed structure fire.

The fire on Alexander Avenue – just North of the border – began shortly before 6 PM, and fully engulfed the home in flames.

The heavy smoke was seen as far as Coventry Square.

Nobody was injured, an official told TLS. Howell Police say a dog was rescued from the fire.

It took the fire department about an hour to bring the large fire under control, the official said.