Peg Perego Recalls Strollers Due To Risk Of Entrapment And Strangulation; One Child Death Reported 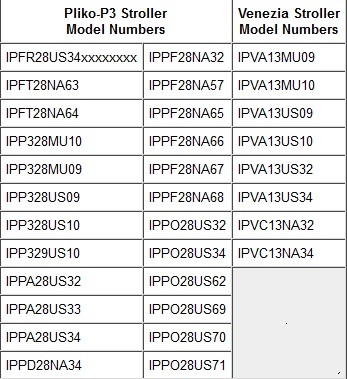 PHOTOS & LIST: The U.S. Consumer Product Safety Commission (CPSC), in cooperation with Peg Perego USA Inc., of Fort Wayne, Ind., is announcing a voluntary recall of about 223,000 strollers due to a risk of entrapment and strangulation.

Entrapment and strangulation can occur, especially to infants younger than 12 months of age, when a child is not harnessed. An infant can pass through the opening between the stroller tray and seat bottom, but his/her head and neck can become entrapped by the tray. Infants who become entrapped at the neck are at risk of strangulation. 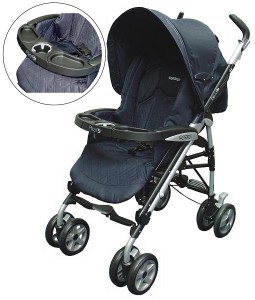 The recall involves two different older versions of the Peg Perego strollers, Venezia and Pliko-P3, manufactured between January 2004 and September 2007, in a variety of colors. They were manufactured prior to the existence of the January 2008 voluntary industry standard which addresses the height of the opening between the stroller’s tray and the seat bottom. The voluntary standard requires larger stroller openings that prevent infant entrapment and strangulation hazards.

Only strollers that have a child tray with one cup holder are part of this recall. Strollers with a bumper bar in front of the child or a tray with two cup holders are not included in this recall.

The following Venezia and Pliko-P3 stroller model numbers that begin with the following numbers are included in this recall. The model number is printed on a white label on the back of the Pliko P-3’s stroller seat and on the Venezia stroller’s footboard. 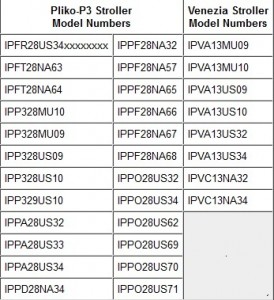 “Peg Perego” and “Venezia” or “Pliko-P3” are printed on the side of the strollers.

The strollers were sold at various retailers nationwide, including Babies R Us and Buy Buy Baby from January 2004 through September 2010 for between $270 and $330 for the Pliko P-3 stroller and between $350 and $450 for the Venezia stroller. They were manufactured in Italy.

Consumers should immediately stop using the recalled strollers and contact the firm for a free repair kit. Do not return the stroller to the retailers as they will not be able to provide the repair kit.

For additional information, call Peg Perego at (888) 734-6020 anytime or visit the firm’s website at http://www.pegperegousa.com/babyproducts-site/recall-notice/

CPSC and Peg Perego warn consumers that these strollers may be available on the secondhand market, in thrift stores or at yard sales. Consumers should not buy or sell these recalled strollers until the repair kit is installed. TLS-CCP.