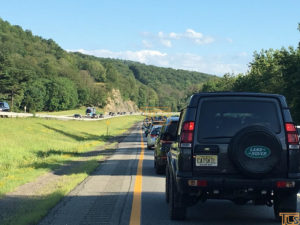 Each year, families pack up their belongings and head up to the “country” where they hope to find some reprieve from the oppressive heat and humidity of New Jersey. While the extra space and cooler air of the mountains brings much joy to many children, their parents often don’t share those feelings.

In many cases the mother and children go up to the mountains while the father remains behind and continues to work at his regular weekday job, going up to the country to join his wife and children on the weekends. There is nothing essentially wrong with this, but many rabbonim have been sounding the alarm over negative consequences of such an arrangement.

What happens at times is that the husband, being away from his family, especially his wife, finds “outlets” for himself – activities that he would never engage in if he were with his wife. These activities can range from mildly worrisome to behavior that could potentially wreck his marriage – let’s leave it at that. It isn’t a smart idea to put oneself in such a precarious position.

The Gemara states that it’s assur to go to a place that you know will have pritzus, even if you think you can just close your eyes and ignore it, because you cannot put yourself in a position that can cause you to stray. This goes for having unfiltered phones, it goes for going to beaches in the summer, and I believe it also is applicable for when you leave your wife and children for extended periods of time without supervision.

Our community has recently been dealing with several new issues that twenty years ago were completely unheard of. The overdose epidemic is the most predominant, but there are others as well. A friend in a doctor’s office in Lakewood told me how diseases that he hadn’t ever seen in Lakewood have recently become not-quite common, but common enough to warrant a response… Let’s not fool ourselves – it’s a problem and it needs fixing. And husbands being away from their wives isn’t helping.

To be clear, nothing I am alleging is occurring applies to everyone – to the contrary. The overwhelming majority of people are upstanding, loyal, and take their family and marriage seriously. As with most issues that affect our community, it is the few that make things seem worse than they actually are. But this problem being confined to only a few individuals should not preclude us from bringing it out into the open.

Human beings such as ourselves are flawed. We have desires that constantly need to be tamped down. Each of us have our own faults and our personal fights, but we all struggle – it’s a part of the human condition. Leaving your family for an extended period of time gives a little leeway to our innate desire for errant behavior. And that can result in catastrophe.