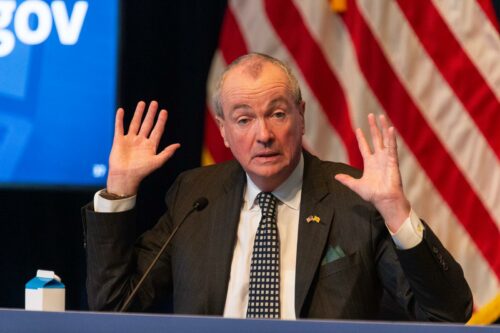 While Governor Phil Murphy delivered remarks reaffirming his commitment to comprehensive gun safety reform in the wake of Uvalde school shooting, he had already pushed for new gun control measures even in advance of the Buffalo and Uvalde massacres.

Murphy singled out four Republican lawmakers by name who have sponsored or pushed for legislation to expand access to firearms or ammunition and said he is seeking a vote on “every bill seeking to unravel our gun laws.

For some reason he did not mention Ocean County Assemblyman and Assistant Minority Leader Ronald S. Dancer (R) that echoes Doherty’s bill.

In yesterday’s speech in the State’s Capitol, Governor Murphy came out publicly in the State’s Capitol clearly opposed to CCW’s in houses of worship. In a prepared statement, the Governor called out Republicans for their advocacy of allowing places of worship to establish security programs to select one person to carry handgun during religious services. He accused Republicans of taking “blood money” from the gun lobby.

In particular he came out against Senator Michael J. Doherty (R), the Ranking Member of the  Judiciary Committee’s bill of 01/11/20/22 introduced in the Senate which was  referred to the Senate Law and Public Safety Committee. The bill calls for places of worship to establish a security program to select one person to carry a handgun during religious services.

The Bills define a “Place of Worship” as:

“Place of worship” means a building, including but not limited to a church, mosque, or synagogue, used primarily as a place of public or private worship on a permanent basis by a recognized and  established religious sect or denomination registered as a not-for-profit organization pursuant to Section 501(c)(3) of the United 13 States Internal Revenue Code.

“Religious service” means an assembly of the adherents of any religious sect or denomination registered as a not-for-profit 16 organization pursuant to Section 501(c)(3) of the United States Internal Revenue Code for the purpose of prayer or any other form of religious observance.

Murphy singled out four Republican lawmakers by name who have sponsored or pushed for legislation to expand access to firearms or ammunition and said he is seeking a vote on “every bill seeking to unravel our gun laws.

Assembly Minority Leader John DiMaio (R-Warren) who is co-sponsoring NJ A124 (22R) that would eliminate the statutory prohibition against the possession of “hollow point” ammunition, Sen. Ed Durr (R-Gloucester) for sponsoring a bill NJ S2488 (22R) that would remove capacity limits for ammunition magazines and a measure NJ S2490 (22R) that would repeal the Extreme Risk Protective Order Act of 2018 or so-called “red flag law,” which prohibits a person from owning or buying a firearm or ammunition if the person is deemed to pose “a significant danger of bodily injury” and as mentioned above, he also called out Sen. Mike Doherty (R-Warren) for sponsoring a bill NJ S675 (22R) that would allow churches and other places of worship to establish a security program and select a person to carry a handgun during religious services.

Among Republicans supporting expanded gun legislation, freshman Durr has been the most visible this year.

Durr touted the first phase of his 15-bill package, introduced in early May — less than a week before a gunman shot 13 people and killed 10 in a racist attack at a supermarket in Buffalo, N.Y. — as a “mega bundle” to “advance safe, responsible firearm ownership for law abiding citizens.”

Among the measures in the package are bills that would decriminalize the purchase, possession and transfer of armor-piercing ammunition and firearms with modifications, including sound and flash suppressors, as well as those without serial numbers (NJ S2637 (22R)), allocate $1 million for high schoolers to start gun clubs and take firearms safety courses (NJ S2634 (22R)) and eliminate the 30-day waiting period between handgun purchases (NJ S2602 (22R)).

Brad Schnure, a spokesperson for the Senate Republicans, called Murphy’s characterization of Republicans’ bills during the press conference “false and inaccurate,” Schnure said the data instead shows the red-flag law has resulted in:

“We’re tired of having to direct law enforcement to be in front of schools,” Platkin said in Trenton Wednesday. “It is ongoing, but we’re tired of the fact that it’s ongoing.”

Healthcare Workers Jump Into The Fray

Healthcare organizations and their leaders are renewing calls on Congress to pass new gun control legislation and support gun violence intervention programs in the wake of the deadly mass shooting at a Texas elementary school.

The messages of condolences and grief for the families also carry an edge of frustration, often remarking on Congress’ inaction following other high-profile tragedies like the Sandy Hook Elementary School attack in 2012, the Pulse Nightclub shooting in 2016 and this month’s supermarket shooting in Buffalo, New York.

“Across the country, nurses, workers, and parents all feel the pain of loss and the despair of knowing too little has changed since the last tragic mass shooting,” New York State Nurses Association President Nancy Hagans said in a Wednesday statement. “We need our political leaders to offer more than empty rhetoric—we need real change. Gun violence is a public health emergency, and we need to use every tool possible to remedy it.”

“Thoughts and prayers are worthless.”

Eleven days ago, it was 10 innocent shoppers at a supermarket in Buffalo.

Yesterday, it was 19 beautiful schoolchildren and two educators in their classroom in Texas.

Another day in America, another horrific act of gun violence enabled by the weak and feckless politicians kept in the holster of the gun lobby.

As a father and as a human being, my heart is broken for the families who are reeling from this incomprehensible tragedy.

But as an American, I am outraged and I am exhausted.

I am outraged that our nation remains the only one in which the senseless murder of innocent children and their teachers is even tolerated.

I am exhausted that we have another double-digit death toll and one side – one side – refuses to do anything.

I am honored to stand today with Senators and Assembly members, and community and educational leaders, who are ready to do something. New Jerseyans who believe – as I do, and as the vast majority of New Jerseyans do – that enough is enough.

That we don’t have to watch as more and more innocent people – including schoolchildren – are gunned down. That we can end this senseless and relentless cycle.

I introduced the comprehensive Gun Safety 3.0 package over a year ago and this moment demands that the Legislature finally take action.

These proposed laws are hardly revolutionary. They would mandate safe storage of guns. They would ensure that those seeking to buy a gun are actually trained in the safe handling of that gun.

They would give police tools to better track the paths of firearms used to commit crimes. They would prohibit the sale of weapons that can bring down helicopters.

They would allow us to hold the gun industry liable for the carnage it has enabled.

The legislators standing with me are ready to act. I am ready to sign them into law. We’ve been ready for more than a year now.

I call upon the Senate President and the Assembly Speaker to put these bills up for a vote, so the people of New Jersey can see where every legislator stands on these commonsense measures.

But let’s not stop there. I ask the Legislature to immediately put up every bill seeking to unravel our gun laws, too. Let’s make every legislator show whose side they have chosen to be on – the people of New Jersey’s or the gun lobby’s.

In the face of mass shooting after mass shooting throughout our nation, in the face of children being slaughtered to the point where the reports indicate these beautiful children were unrecognizable, I say let these folks come out from behind their press releases and their tweets and cast votes before the residents of this great state.

Let the people of New Jersey see who votes “yes” to saying that churchgoers should be able to take their guns to services, as Senator Mike Doherty wants.

Let the people of New Jersey see who votes “yes” to allowing anyone – anyone – to carry a concealed gun, as Senator Durr and Assemblyman Ron Dancer want.

Let the people of New Jersey see who votes “yes” to repealing our red-flag law and letting those known to have made violent threats, including domestic abusers, unfettered access to as many guns as they want … as Senator Durr wants.

Let’s put every gun bill up, so the people of New Jersey can see, in no uncertain terms, who supports commonsense gun safety and who wants New Jersey’s streets and communities to be flooded with guns.

Let’s see who the gun lobby banks on with their blood money.

There is no lack of irony that those who would stop at nothing to strip a woman of her rights and autonomy and force her to give birth are doing nothing to prevent that child from being murdered in their school.

In four years, I am proud of the progress we’ve made to become one of the nation’s leading states on gun safety. But I’m not satisfied – and those standing with me aren’t satisfied – with being “one of.”

Let’s send the message now. Let’s act before our nation gets lulled back into its slumber – as it was already beginning to do after the murders in Buffalo.

The scripture is clear – James, Chapter 2, Verse 17 – “Faith without works is dead.”

Thoughts and prayers are worthless. Action is the only thing of value.

This article may contain commentary which reflects the author’s opinion.