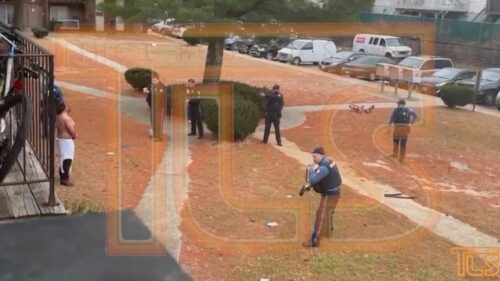 By C.L. The internet and social media exploded over the last 24 hours with praise for the Lakewood Police officers who prevented more bloodshed, by tasing the double homicide suspect instead of fatally shooting him.

“Your bravery and professionalism is unparalleled.”

“They could have easily shot him.”

“You’re too nice to these killers.”

“They handled it well. Set a good example.”

“These officers deserve every penny.”

These are just some of the hundreds of comments online.

The Ocean County Prosecutor too praised their actions.

“The deaths of these two men are senseless and tragic,” Prosecutor Billhimer stated. “The responding Lakewood Township Police Officers should be commended for their bravery and their use of less than lethal force in taking Drummond into custody. They prevented a bad situation from getting worse.”

Upon arrival, police knew they had a deadly shooter on their hands, and shots were already fired – which means this suspect was ready to shoot again. Like most homicide suspects, Drummond knew he was likely going to jail for life, so shooting his way out of it is a very likely option – even if it meant him getting shot in the process. Sadly, life no more meant anything to him.

When a suspect knows he has nothing to lose, his actions are most terrifying.

These police officers arriving on scene knew they wanted to go home to their families last night, but they also had a job to do – and that was putting their lives on the line, right in the line of fire. Because that’s the oath they took. And this could have been the most defining moment of their careers, and a day they would hope never came.

When Drummond refused to get on the ground, he had multiple lethal guns pointed right at him. And had the suspect made any threatening gestures or moves and police had pulled their triggers and riddled him with bullets, it could have been justified. But these officers were calm and professional, and were looking to end this with the least bloodshed as possible.

Moments after the suspect was taken down, police rushed inside and located the two homicide victims. But outside, police kept the scene calm and under control.

A traumatized woman who went running to an officer after the suspect went down, can be seen getting hugged and comforted by an officer. And when the woman frantically begged police to check on her friend, police could have ignored her, but instead, an officer can be seen calmly walking over to her and telling her, “we will.”

This is our Lakewood Police Department under the leadership of Chief Gregory Meyer.

Our men and women in blue are role models for the entire Country, and something we should be proud of.