Op-Ed: Working Together We Can Win The Battle Against The Summer’s Most Unwlecomed Guest – The Mosquito | Freeholder Gary Quinn 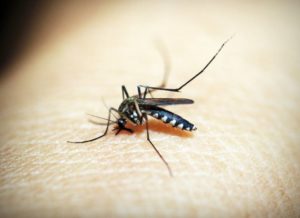 Though never invited, they are an unwelcomed guest at every backyard barbecue, baseball game, picnic, hike and trip to the beach.

You guessed it – the pesky and sometimes dangerous mosquito.

Fortunately, working together we can keep these flying parasites at bay.

As Freeholder Liaison to the Ocean County Mosquito Commission, I want to reassure our residents that the commission works year-round identifying mosquito habitats and breeding grounds, then does its best to bring the insect’s population under control.

Using a variety of mosquito countermeasures – a method known as integrated pest management – the commission tackles mosquitos at the source.

Larvicide applications help control pre-adult mosquitos, while biological methods, such as introducing mosquito-eating fish in breeding pools, are a natural way to control the population.

Sometimes, a mosquito-rich habitat can be slightly altered to prevent a growing population of the flying pests.

For larger areas, the commission operates two helicopters to treat areas aerially. Most of the aerial applications are limited to the county’s extensive salt marshes.

Salt marshes can also be managed through the use of amphibious equipment, which eliminates reproducing mosquitos without the use of pesticides. Once completed, the areas become more useful to other members of the tidal food web, and remain in that state indefinitely.

Much of the Mosquito Commission’s work goes unnoticed by our residents. But the commission is only one part of the battle against the bugs. The rest is up to us.

There are easy steps all of us can take to control the mosquito populations in our neighborhoods.

One of the easiest changes is the removal of any standing water from our yards.

Mosquitos breed in water that collects after a rainfall. Birdbaths, old tires, buckets and other plastic containers are ideal mosquito nurseries.

According to our own Ocean County Health Department and its Freeholder Liaison Gerry P. Little, mosquitos can grow in a container as small as a bottle cap.

Unfortunately, mosquitos can be more than just an itchy nuisance. The insects can carry several harmful viruses, including encephalitis and West Nile.

Cleaning up any standing water from our yards is our first line of defense against these diseases.

But even out best efforts will never be enough, so don’t forget to apply an EPA-approved insect repellent when venturing outside.

I hope everyone has a happy, safe and itch-free summer.