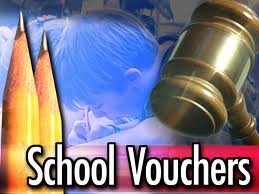 School vouchers are a means for enabling parents to decide which school they would like to send their children to, should they opt for other then the public school system. Simply put, a parent would inform the Board of Education that they would like to transfer their child to a private or charter school, and request a voucher that would go towards covering the cost of that school’s tuition.

There are many voucher programs currently up and running within the United States. Not all voucher programs are the same. Leading the United States in big city status is Milwaukee, Wisconsin with over 15,000 students enrolled in its voucher program. In the state of Maine, not every small village has a school, and therefore some villages pay tuition for its students to another district that they attend in surrounding villages. Of note, the state of Indiana just recently passed a state school voucher program. Indiana’s program would offer a total of $4,500 per student from households with incomes under $41,000.

While the benefits would be obvious, the opponents stem from differing philosophies. From those who grunt about the unfair tax burden to begin with, to those who claim that opening up tax payer money to other then public school systems would somehow undermine the public school level of education. Most notable amongst those with this argument are public school teachers. The proponents argue that competition can only help.

To allay the fears that a school voucher program would be barred from paying for students going to a religious school, don’t fret, as the United States Supreme Court has already ruled in your favor. This particular issue was settled do to a voucher program installed by the city of Cleveland, Ohio during 1995.

Seemingly, a majority of residents who opted to benefit from Cleveland’s voucher program were sending their children to Catholic schools. The Chief Justice’s opinion, writing for the majority was: “The incidental advancement of a religious mission, or the perceived endorsement of a religious message, is reasonably attributable to the individual aid recipients not the government, whose role ends with the disbursement of benefits.” Or- The government is neither directly influencing nor promoting religion, and is leaving it to the parents to decide where and what they educate their children with.

The Supreme Court ruled that the Ohio program did not violate the Establishment Clause, because it passed a five part test developed by the court in this case. It is called the Private Choice Test. A: that the program must have a valid secular purpose, B. that aid must go to parents and not to the schools, C. that a broad class of beneficiaries must be covered, D. that the program must be neutral with respect to religion, E. that there must be adequate nonreligious options.

While how this program may be implemented here in Lakewood is beyond the scope of this article, a few of the more difficult challenges are readily apparent.

As of today, roughly 1/3 of Lakewood households representing 4/5 of Lakewood school age children are registered in private schools. Of the other 1/5 of Lakewood Public School Children, over half come from renting households whom do not even contribute to the tax base to begin with. So obviously, it is apparent to one and all exactly who such a tax burden would fall upon to pay for a voucher program.

I expect an open forum can and would contribute greatly to the particulars of how to innovate a Lakewood School Voucher program. It is not beyond reach, and perhaps can serve as a pilot program for the rest of the county or even state. Of course if it can be coached into reality in Trenton, it would certainly alleviate any local discussion and resources, and surely benefit a worthy cause here, and across the state.