Op-Ed: Lakewood Election: Just Who To Vote For 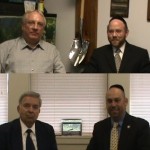 By: Aaron Joseph. In my mind’s eye, a perfect representative for us, the people, is the best from amongst us. Now of course no one and nothing is perfect other then God. However, he who strives to be Godly is good enough for me. Of course when faced with a task of selecting one of two or two of four in an election I seek the best of the pair(s).

I personally would not vote for a confirmed atheist or a bigot. These do not represent the best from amongst us- and to say the very least, such type are not Godly. In this year’s election – none seem to be atheistic or bigoted. So who to vote for.

Of course our current president promoted all his wonderful accomplishments and prior voluntary work while running for office. He made sure we all knew of the books he had published and the wondrous dreams he wrote of in them- which has absolutely nothing to do with his- or our reality today. Our president while running made sure that we all knew of his tremendous educational accomplishments that he had accumulated under his belt- yet he mostly hid his background- even as minutely as his birth certificate.

This brings me to two more things. Education and background.

When faced with the obligation of perhaps hiring our next town Mayor, it is incumbent upon us to hire someone with the highest degree of educational accomplishments and a most wide ranging background and world knowledge as possible. After all, if a man is to do the best job he can, should he not already come prepared with all the equipment he has earned for himself and which can be stood upon while serving us. Of course the aptitude to properly utilize all he’s got is priority. If given the choice, wouldn’t it make most sense to choose he that possesses the better of these two all important attributes in their political portfolio.

But what it all boils down to is experience. A man can be brilliant. A man can be charismatic and even sound profoundly knowledgeable. But it is only through his life’s experience and accomplishments that he can properly be defined.

I am not saying that an incumbent candidate automatically deserves reelection by virtue of his simply having been in office previously. Throughout American and electoral history there are prime examples of incumbent politicians who were a total failure or worse. Richard Nixon and Bill Clinton are just two examples. Both where known to be brilliant, and they where also both known to be highly charismatic- and the United States was ever successful as a country during their tenure. Yet both had their true color finally come forth and earned the ire of the population during their second term. Mr. Nixon resigned and Mr. Clinton was impeached by the U.S. House of Representatives, both having been recipients of censorship for personal failings. Other public servants throughout history simply could not benefit the public, and hence were not to be reelected.

Yet let us face it, someone who holds an office is already knowledgeable in its callings and experienced in its dealings. If there is no cause to change other than for change in and of itself- should not consistency, reliability and even stability be an overriding factor? For starters, it is far easier for other neighboring township governments, and county, state and even federal officials to deal with people in our township government that they are already accustomed to dealing with, and perhaps have a professional if not personal relationship with already. Isn’t change for the sake of change simply silly in the bigger scheme of things? Our current president while running for office campaigned on one word: Change. – Boy oh boy- were we ever in for one! Go out and vote. Vote consistency. Vote experience.

While there have always been those who say “I can do it better.” That expression leaves most feeling stymied. How can that political wannabe possibly know for sure that he can do it better? In essence what I think he means to convey is: Give me the chance to be paid by you to learn about the job on the job at your full expense- so that in three years time someone else can claim that he can do my job better then me.

I for one remain unconvinced.

While no one appreciates pressure regarding just who to vote for, it might be beneficial for all of Lakewood to simply do a bit of real homework- should you choose to vote in this years township election. This homework would benefit us all.

Find out who can truly accomplish the job that we as a community expect to be done. Who actually does have the education acumen and background to best benefit you and I. Who has already accumeulated the life experience and wisdom? Who has the experience and professionalism that would most positively promote Lakewood and its citizenry? Go out and vote – but know what you are doing. In essence, be an educated voter.

There are many significant attributes about the candidate that a voter should be aware of before casting a vote. Know- not just the name and the smile that you are voting for. Know who and what is behind it.

And in the final analysis, experience counts.