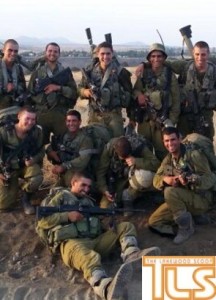 The following ‘letter to the editor’ was submitted by Ocean County Freeholder Gerry P. Little: As liaison to the Veterans Services Department, I have joined in honoring the service of hundreds of men and women from Ocean County who responded to our nation’s call to duty in the aftermath of the radical Islamic 9-11 terrorist attacks against America. We thank each solider, sailor, airman, Marine and Coast Guardsman who served and continues to serve in the War on Terror to defend our freedom. We especially pray for the families of the 13 soldiers from Ocean County who made the ultimate sacrifice fighting the terrorists, who killed almost 3,000 Americans on September 11, 2001, even more than died on the “Day of Infamy” December 7, 1941 attack on Pearl Harbor.

And now, we pray for another brave son of Lakewood and Ocean County, 22-year-old Aaron Langert. Aaron is among about 750 Jewish-Americans serving in the Israeli Defense Force. He is deployed with his unit, the Highland Brigade, fighting the radical Islam Hamas terrorists in the Gaza Strip.

Just as America has defended herself in the War on Terror, Israel has the right to protect her people from terrorist attacks. Terrorists who indiscriminately launch thousands of missiles into Israeli neighborhoods, use suicide bombers to kill innocent Jewish civilians in buses and restaurants, conceal their weapons and missiles in schools and hospitals and use their own women and children as human shields. Israel will prevail and America must continue to stand by her side.

We pray for Aaron Langert and we pray for Israel. May God continue to bless the United States and America and Israel.