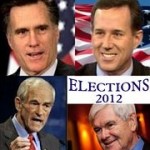 Mitt Romney is all tied up with President Barack Obama in a likely general election matchup, with the president showing signs of weakness on the economy and Romney seen as out of touch with ordinary Americans, according to a new national survey. And a CNN/ORC International Poll released Monday also indicates that Rep. Ron Paul of Texas is also even with Obama in another possible showdown this November. The survey also suggests the Republican advantage on voter enthusiasm is eroding, which could be crucial in a close contest.

According to the survey, if the November election were held today and Romney were the Republican presidential nominee, 48% say they’d vote for the former Massachusetts governor, with 47% supporting the president. Romney’s one point margin is well within the poll’s sampling error.

The poll also indicates Paul statistically tied with Obama, with the president at 48% and the longtime congressman at 46%. But according to the poll, the president is doing better against two other Republican presidential candidates. If Rick Santorum were the GOP nominee, Obama would hold a 51%-45% advantage over the former senator from Pennsylvania. And if Newt Gingrich faced off against the president, Obama would lead the former House speaker 52%-43%.