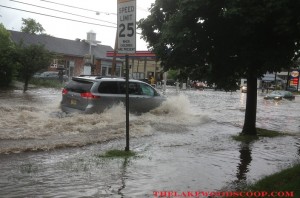 The National Weather Service has issued an Urban and Small Stream flood advisory which will remain in effect until 1:15 PM this afternoon.

An inch to an inch and a half of rain has fallen across the area so far this morning. An area of moderate to heavy rainfall will move across the area during the next several hours and could produce another inch of rainfall through the morning hours, with additional rainfall continuing into the afternoon.

Excessive runoff associated with this rainfall will cause minor flooding of highways, streets, and other poor drainage areas and low lying spots. Underpasses prone to flooding could also be affected.

Do not drive your vehicle into areas where the water covers the roadway. It can severely damage your vehicle. [TLS]