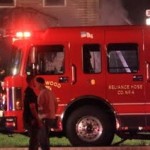 A fire broke out early this morning at a home on Arboretum Drive, but nobody was injured, Fire Chief Rodney Youmans says. The fire started in the master bedroom, and was called in at about 2:23 am. Youmans says the homeowner attempted to extinguish the fire on his own, but was unsuccessful.

The home’s occupants all made it out uninjured.

Multiple firefighters arrived and managed to contain the fire to that one bedroom.

The Fire Marshal’s office responded to the scene and is investigating the cause of the fire. TLS-CCP