Nobody Injured In Early Morning Fire At Tent City 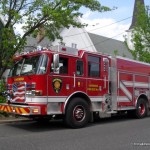 An early morning fire destroyed a tent in tent city today, but nobody was injured, police confirmed. At about 6:00 AM, police and firefighters responded to the homeless camp on Cedarbridge Avenue and found a tent on fire. The occupant(s) made it out uninjured and the fire was extinguished before it could spread further.

The cause of the fire is unknown at this time.

At least one past fire at the camp started from a propane tank used to heat a tent.

The Fire Marshal’s office responded to the scene. TLS-CCP/Lakewood Shopper.