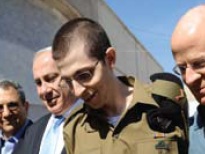 By Binyamin Rose. It was a deal that some say never should have been made, and it may well be the last of its kind. But the prisoner swap that sprung Gilad Shalit from captivity to freedom after more than five years in a Hamas dungeon in Gaza uplifted and unnerved a nation that is no stranger to the trauma of trying to reconcile opposing and often highly emotional views. What cannot be forgotten is that the hardest adjustment of all belongs to Gilad Shalit himself.

The whirring of the helicopter’s engine preceded its appearance in the darkening, blue-gray, late afternoon sky, high above Mitzpe Hila, which itself sits perched 1,600 feet above sea level four miles south of the Lebanese border.

Moments later, the helicopter landed in a clearing amid a lush, green forest, bearing its precious cargo. A police escort was waiting on the ground on motorcycles and in reinforced vehicles, as supporters waving Israeli flags waited with heightened anticipation along Mitzpe Hila’s main road.

Gilad Shalit and family jumped off the helicopter into a waiting GMC Savana for the five-minute ride back home — a place he hadn’t seen for 1,942 days, following his kidnapping at the hands of Hamas terrorists in Gaza who slipped through a tunnel into Israeli territory. While Mitzpe Hila had been declared a closed military zone a day earlier, there were still as many as a thousand people on hand to cheer him on, including residents and many Succos guests.  Mitzpe Hila is a popular vacation spot for Israelis familiar with its pastoral quiet and its wide array of guest homes and bed-and-breakfasts. Many volunteers who had manned the protest tent that Gilad’s parents had set up near the prime minister’s home in Jerusalem to press their case for his return were also invited to the homecoming as a reward for their efforts.

When the van pulled up at the Shalit house, Gilad was third person out, after his parents. He looked furtively to his left at the crowd and seemed to wave, or even salute, briefly placing his left hand over his head. Crossing in front of the Savana, he ducked under a row of trees and disappeared from the eye of the cameras, but not before appearing to break into a sprint to rush inside.

Many of the protest tent volunteers were young, religious Jews who broke into the popular song Avinu shebaShamayim — with the words that we have no one else to rely on but our Father in Heaven. For religious people the Hand of G-d was apparent and even for the nonobservant Israeli, the message of the song was at least subliminal. Gilad arrived at his home exactly at sunset, as Hoshana Rabbah began. The singing and dancing continued for as long as it took the sky to turn into a colorful splash of purple and orange. Finally, the crowd was cleared from the front of the home to give the Shalit family some solitude. About an hour later, Gilad’s father, Noam, emerged, giving a brief news conference, in which he said that it was a long and trying day, but that Gilad was doing as well as could be expected — although he had some shrapnel wounds that hadn’t been properly treated, and he was clearly deprived of sunshine and food.

It was a day of hugs and embraces for the Shalit family, and indeed his return was a pitka tava for them. For the families who lost loved ones in previous terror attacks, only to see the perpetrators of those atrocities released in the prisoner swap that brought Gilad Shalit home, and for other worried Israelis, the hope and prayer is that the Shalits’ embraces of tears and joy won’t be a cause for other embraces and tears of mourning.

Every Bit as Dangerous Some 1,027 security prisoners were released from Israeli jails in exchange for Shalit. Even Supreme Court Chief Justice Dorit Beinisch, who signed the majority opinion rejecting the appeals of several families who filed a last-ditch attempt to stop the government from proceeding  with the swap, noted that the price of the swap was “the cancellation of legal rulings that determined these people should be in prison.”

Public opinion surveys show that while four in five Israelis supported the exchange, three in five said they were certain that the released terrorists will return to their wicked ways. Kadima MK Yisrael Hasson noted that based on previous statistics, some 30 to 40% of the released prisoners can be expected to return to a life of terror.

Mordechai Kedar of the Begin-Sadat Center at Bar-Ilan University, who served for 25 years in IDF intelligence, contends that these terrorists remain every bit as dangerous as other jihadists, but not necessarily because they are motivated to avenge their incarceration. “They have motivation to prove — by promoting terror — that they were not recruited by the Shin Bet to collaborate with the Israelis in return for their release,” he clarifies.

While most of the prisoners were sent to Gaza, which Israel has blockaded by land and by sea, and others were deported to various Middle Eastern countries, more than 100 prisoners returned to homes in East Jerusalem or Yehuda or the Shomron — in many cases, adjacent to Jewish neighborhoods.

Daniel Gordis, a senior fellow at the Shalem Center in Jerusalem (the same think tank that Michael Oren worked for before Prime Minister Netanyahu tabbed him to be his ambassador to the US), noted in an article in the latest edition of Foreign Affairs that “no one in Israel is calling the agreement signed for Gilad Shalit’s freedom a good deal. On many levels it is terrible.”

Gordis argued that for the first time, Israel has essentially acquiesced as a terrorist organization dictated the list of prisoners to be released, including several responsible for mass deaths of Israeli citizens, a notion that would once have been unthinkable.

Alon Pinkas, a former advisor to the foreign ministry, noted in the same publication that Israelis generally recognize the contradiction in their values. “I’m happy that Shalit is coming back, but I oppose the deal” is a constant and understandable refrain.

While Pinkas agrees with the heads of the Shin Bet and the Mossad, Israel’s main security forces, that Israel can withstand the release of the prisoners and terrorists it frees today, “the country has shattered whatever pretense it had to a coherent counterterrorism policy and whatever ability it had to deter terrorism. In other words, a bit of cognitive dissonance is fine for Israeli individuals, but not for a government.”

The Stretcher March Many motivations have been suggested for Prime Minister Netanyahu’s turnabout on the issue, ranging from personal weakness under pressure from the Shalit family’s multiyear campaign, to a desire to increase his political popularity. Certainly the official IDF photograph taken of a beaming Netanyahu looking on at Noam and Gilad Shalit in their reunion embrace will not hurt his re-election chances in 2013.

More complicated reasons were also cited. This was a multinational deal that benefitted Israel by the return of Shalit. It helped Hamas in its rivalry against the Palestinian Authority (PA), whose UN request for statehood could potentially freeze Hamas out of the picture.

“It definitely showed that Hamas can deliver what the PA cannot,” said Dr. Kedar. “The PA exists only because Israel resuscitates it, the US fuels it with money, and the US encourages international readiness to recognize the Palestinian state. Without these three supporters, the PA would collapse.”

Egypt, which played a mediator’s role in processing Shalit’s return, profited by showing that it still has political clout in the region at a time when both Turkey and Iran seem poised to replace Egypt as the dominant power in the Middle Eastern Muslim world.

It is likely that all of the above factors played a role. However, another factor is that in Israel, where army service is mandatory, the concept of abandoning a soldier on the battlefield, or to the enemy, is unacceptable to the Israeli public. IDF soldiers in basic training all participate in a drill known as the “stretcher march.” Soldiers carry one of their heaviest comrades on a stretcher up hills and down valleys for miles.

“It is a formative ritual meant to instill one message: there is never a case in which soldiers cannot bring their wounded home,” writes Mr. Gordis. “Compare this to the silence in the United States regarding Bowe Bergdahl, the US soldier held hostage by the Taliban since June 2009. Ever since Shalit’s kidnapping, Israeli society has been wracked by a sense that it failed in its obligation to him.”

This is also not the first time that Israel has completed such an apparently one-sided deal. Over the years it has traded more than 13,000 prisoners for 16 Israelis, not all of them still alive. In 1983, the Yitzhak Shamir government freed 66 terrorists and 4,500 detainees captured during the 1982 war in Lebanon in return for six soldiers. In 1985, the Shimon Peres government released 1,150 prisoners in exchange for eight Israeli soldiers. The 2004 Tannenbaum deal saw the Ariel Sharon government release 436 detainees in exchange for one Tannenbaum — an Israeli reserve officer kidnapped by Hezbollah after being lured into a business deal. And in 2008, Israel exchanged scores of Lebanese and Palestinian detainees and prisoners for the bodies of two Israeli soldiers, Ehud Goldwasser and Eldad Regev, who were captured during a 2006 Hezbollah ambush on the Israeli-Lebanon border and who died shortly thereafter. [Full article will appear in this week’s Mishpacha Magazine].