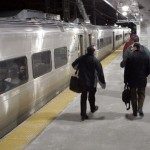 NJ Transit’s bus and train riders will have to pay 25 percent more in fares to help close a $300 million budget shortfall, the agency announced this afternoon. NJ Transit customers will also have fewer trains from which to choose, with 32 trains being dropped – at least two per each of the system’s 11 train lines. Beginning as soon as May, the cost of a bus trip from Paterson to New York will jump from $5.25 to $6.55 and the cost of a train trip from Montclair State University to New York will increase from $5.75 to $7.20.

While not unexpected – a letter from a union president to members telling them that a 20 percent to 30 percent increase was imminent was leaked to newspapers last month – the size of the increase was still stunning. Other increases over the years have been in the 10 percent range.

“The service cuts and fare hikes announced today will have a devastating effect on transit riders, forcing people to pay more for less service, longer commutes and more crowded buses and trains,” the Tri-State Transportation Campaign, a transportation watchdog group, said in a statement.

The fare hike figure comes on top of news earlier in the week that NJ Transit was laying off 200 workers, cutting contributions by one-third to the employee 401(k) retirement fund and decreasing executive pay by 5 percent.

“We recognize that any increase is a burden for our customers, particularly during a recession,” newly hired NJ Transit Executive Director Jim Weinstein said. “However, we have worked to keep local bus fares below the regional average and preserved some important discounts for seniors and people with disabilities, as well as for students and others who are among the most transit dependent.”

The agency begins a series of public hearings throughout the state on March 25, or people may submit comments through an online form. Star Ledger