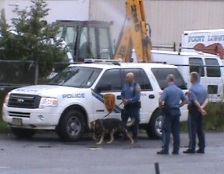 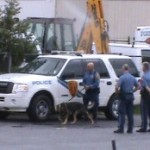 PHOTOS & VIDEO: The NJ Transit Terminal was evacuated this afternoon after an unattended package was left inside the Terminal. At about 12:15 PM, Police received a call from the NJ Transit about a duffel bag left near a gabage bin, and evacuated the building.

The Fire Department and EMS responded to the scene and closed off the surrounding streets.

K-9 dogs from the NJ Transit Police were called and determined the package to be personal belongings.

The Terminal was re-opened about an hour later. TLS.