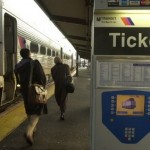 By Zoe Baldwin, NJ. The service cuts and fare hikes announced by NJ Transit will have a devastating effect on transit riders, forcing people to pay more for less service, longer commutes and more crowded buses and trains. Governor Christie’s recent slashing of state support for NJ Transit by 11 percent and refusal to raise fees for drivers, is inequitable. The system-wide service cuts, including longer wait times on 50 bus routes and every train line, will worsen commutes for all transit users but will have a disproportionate impact on bus riders. Nearly two-thirds of New Jersey Transit users are bus riders, many with incomes below the state median. By underfunding NJ Transit, Governor Christie hurts working families, students, seniors, and people with disabilities the most.

Raising fees on transit riders while avoiding raising fees on car or truck drivers is an unbalanced and inequitable way to fund our transportation network. Over the past decade, NJ Transit ridership has increased at twice the rate of driving, even though the latest fare hike will mean that fares have increased by 68 percent since 2000 while the state gas tax has not gone up since 1988. These cuts drive this economic and environmental progress backward by forcing more people to drive and creating increased hardship for those without cars who have no transportation alternatives.

In the worst recession since the Great Depression, New Jerseyans are struggling to make ends meet and need reliable, affordable transit to get to work and to find work. A 25 percent fare increase is too much of a burden.

The Tri-State Transportation Campaign calls on Governor Christie to restore funding to NJ Transit, and urges state legislators to stand up for all their constituents. Balancing the state’s budget woes on the backs of those who can least afford it is unfair. It is unfortunate that the state’s elected leadership continue to fiddle, while transit users are the only people being called on to help put out the fire.

These cuts are stopgap solution for the real crisis — a broke transportation fund that is overburdened with debt. But other options exist to deal with the state’s transportation funding crisis, such as an increase in the gas tax.

A modest gas tax increase of $0.10 per gallon would cost the average household $93 annually and raise $550 million in revenue. Transit riders will pay more:

Family of 3 living in Newark:

Family of 3 living in Morristown: