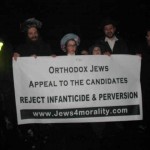 Roman Catholics throughout New Jersey are being asked to pray that state lawmakers don’t allow same gender marriage. It’s part of a continuing campaign by church leaders, who anticipate a possible legislative vote before Republican Gov.-elect Chris Christie takes office Jan. 19. The prayer suggestion is contained in a letter that bishops told priests to read or distribute this weekend. It restates Catholic teaching that marriage should only be allowed between a man and a woman and says prayer is timely “because marriage faces challenges from a society more focused on individual satisfaction than on the Gospel.”

New Jersey recognizes civil unions for same gender couples, and outgoing Gov. Jon Corzine, a socially liberal Democrat, has said he would sign a same-gender marriage bill. But Christie, a practicing Catholic, has said he would veto it. AP