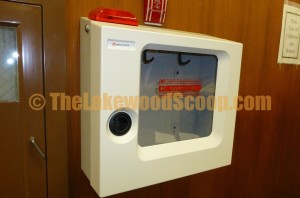 Taking action to prevent the tragic loss of life from sudden cardiac arrest, Acting Governor Kim Guadagno today signed Assembly Bill No. 2072 into law, requiring high schools to provide students with hands-on training in cardiopulmonary resuscitation (CPR) and the use of an automated external defibrillator (AED).

“Put simply, this law will save lives,” said Acting Governor Guadagno. “These critical skills are easy to learn and, as we heard today, can make all the difference in the world to someone in cardiac arrest. Our actions today ensure that more residents than ever will be equipped when the unthinkable happens.”

The bill was signed at Burlington Township Middle School, where, in June, a collapsed student was revived by staff members trained in both CPR and AED use. School nurse Nancy Andorko, one of those who helped the student, spoke at the bill signing.

Laurie Heavener also spoke at the event, sharing her own experiences with CPR. In 2008, Ms. Heavener collapsed as she was waiting to pick up her daughter from a Girl Scouts meeting. A high school student, who had received his CPR training certification card only the day before, happened to be passing by and was able to apply his skills until emergency responders arrived.

According to the American Heart Association, nearly 424,000 people suffer cardiac arrest outside of the hospital each year, and less than 11% of them survive. CPR and defibrillation are the only way to revive a cardiac arrest victim, and survival rates can double or triple if CPR is administered in the first few minutes after cardiac arrest. With every minute that passes, there is a 10% reduction in survival rates.

The bill requires that the hands-on training provided to public and charter high school students and that such training be based on instructional programs established by the American Heart Association, the American Red Cross or other nationally-recognized associations.

“These skills can be learned in thirty minutes or one class period. Frankly, I can’t think of a better use of a half hour,” Acting Governor Guadagno said.

CPR and AED certification courses are available from accredited organizations throughout the State, including the American Heart Association and the American Red Cross.