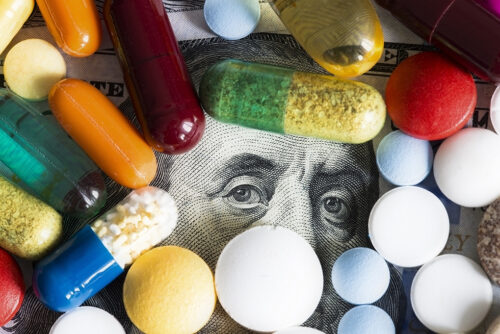 In Lakewood, nearly 90% of consumers find it can get their prescription drugs at a pharmacy and have access to at least three pharmacies within a 5-to-10-minute drive (barring the inevitable traffic). But in addition to the spiraling costs of gas prices to get there, when they do, they find that the drug manufacturers continue to set unreasonably high prices for drugs.

A recent consumer survey of over 1,000 adults showed that a plurality of respondents, regardless of age and location, believe that drug manufacturers set unreasonable prices for the drugs they develop. It’s time for Trenton to stop listening to special interest groups like Pharmacy Services Administrative Organizations and Pharmacy Benefits Managers pushing a self-serving agenda that is driving up prescription drug costs in New Jersey.

Governor Murphy stated in January that one in five New Jerseyans struggle to afford their medication when he highlighted the need for change in his State of the State speech, in January, and one in eight rations their prescription drugs. The prices of insulin and epinephrine injectors, like EpiPens, for treating serious allergic reactions have increased significantly, experts testified, and cost increases in medications easily outpace the rate of inflation since 2015. Citizen Action and AARP New Jersey believe the most effective way to reduce patient costs would be to appoint a panel of experts to identify which medications are least affordable, study the issue and recommend policy solutions. A bill to create such a prescription drug affordability board is also advancing in both houses but was not included in the proposals Murphy outlined in February where Murphy’s office declined to say if he would be amenable to adding this bill to the package of measures, he is championing. Murphy supports a measure introduced in the Assembly to strengthen prescription discounts in the state’s Medicaid program.

New Jersey residents already pay steep prices to live in one of the safest, most family-friendly, and diverse states in the nation. And despite the benefits, we need our elected officials to pass legislation that would mandate lower rather than high prescription drug costs. Yet, year after year, costs continue to skyrocket. According to recent research, the average annual cost of prescription drug treatment in New Jersey rose nearly 58 percent between 2012 and 2017 and continues on an upward spiral. The N.J. Department of Consumer Affairs has created the Prescription Drug Retail Price Registry which can help consumers compare the retail prices charged by many pharmacies for the 150 most-frequently prescribed prescription drugs.

To use this registry, click here or click the “Search” link on the navigation bar under the New Jersey Prescription Drug Price Registry title above. After selecting the medication (prescription drug) and medication type (strength and form) from the pull-down menus, enter your town or ZIP code and then click the Search button. Please make certain to select the proper strength and form (using the medication type pull-down menu) because a prescription drug can be offered in different dosages and forms.

Based on the medication, medication type and town or ZIP code you selected, a list of pharmacies will appear. The registry shows the price per unit (single dose) based upon the last quantity reported by the pharmacy and the retail price for that quantity. The actual retail price may vary depending on the number of units purchased.

The Prescription Drug Retail Price Registry will be updated weekly to provide consumers with current pricing information. Please note that prices may vary from day to day and that the prices shown on the Registry are not guaranteed. The prices displayed in the Registry are compiled from the most recent claims submitted by licensed New Jersey pharmacies to the New Jersey Department of Human Services, Division of Medical Assistance and Health Services as their “usual and customary” prices. If a pharmacy did not submit a claim for a particular drug and dosage during the reporting period, the Registry will include the last reported data for that pharmacy/drug/dosage.

The Division of Consumer Affairs has endeavored to make this registry easy for consumers to use. If you have any feedback or suggestions, you can use the “Contacts” form that is included on the site. You can then cross check with your insurance plan for coverage, caps and actual prices you will pay.

Proponents say S-329 would protect New Jerseyans from high prescription drug costs. But critics say it doesn’t present a holistic solution to controlling costs. These proposals would also impact the taxpayer payments for programs like Medicaid and health plans for public workers. A previous version of the bill called for capping insulin co-pays at $50 would have added $20 million alone to the state’s yearly Medicaid costs however, a $35 cap would definitely have a much more desirable impact.

“Prices for prescription drugs have been extremely high, making it nearly impossible for some patients to afford medications they need to survive, with or without insurance,” state Sen. Jim Beach, D-Camden/Burlington, said in a statement. “Establishing a board to ensure that NJ residents, healthcare providers, licensed pharmacies and other stakeholders within the State health care system are protected from the high costs of prescription drug products is essential.”

The bill allocates $1 million annually to establish the Prescription Drug Affordability Board within the Division of Consumer Affairs in the Department of Law and Public Safety. “This legislation singles out one industry in a very complex health-care delivery market to attempt to control costs,” Chrissy Buteas, chief government affairs officer for the New Jersey Business & Industry Association (NJBIA), said in written testimony.

Despite the Bill, it’s really the outside of government control, Pharmacy Services Administrative Organizations (PSAOs) which are little-known but powerful collective groups that contract with pharmacies. Independently. PSAOs negotiate pharmacy network contracts and perform many core back-office operations for their pharmacies. About 83% of independent pharmacies contract with a PSAO. Over 75% of independent and small chain pharmacies contract with PSAOs owned by the “Big Three” wholesalers (Amerisource Bergen, Cardinal Health, and McKesson). PSAOs lack transparency, and there is almost no federal or state oversight of them. Specifically, PSAOs are not subject to the same kind of reporting requirements as other actors in our healthcare system help independent pharmacies.

The vast majority of independent pharmacies contract with PSAOs, which perform important functions such as negotiating contracts on behalf of their member pharmacies with Pharmacy Benefits Managers, also referred to as PBMs which are the intermediaries of almost every aspect of the pharmacy benefits marketplace. Many people assume that pharmacy benefits come directly from the health insurance provider when, in reality, PBMs are doing the bulk of the work for over 80% of employers in the U.S. PBMs are hired by corporate employers, health plans, labor unions, and other organizations, to interface with drug manufacturers and process prescription-related claims. Like PSAOs, PBMs are an integral part of the flow, and little is known about these middlemen organizations and the important role they play in the pharmaceutical supply chain due to a near-complete absence of government oversight at any level. Currently there are reporting requirements to PSAOs and PBMs as other entities in the overall health care ecosystem.

Other bills (S-1615/A-2840) would require drugmakers, wholesalers, insurance companies and others to report to the state details on sales volume, revenue and other metrics. They would also require manufacturers to notify the state if they planned to hike prices above a certain threshold.

A third set of proposals (S-1616/A-2841) would force pharmacy benefit managers, or PBMs ,Pharmacy Benefits Managers companies that serve as middlemen in the prescription-drug supply chain, to be more transparent and be licensed by the state Department of Banking and Insurance.

These bills are a step in the right direction as it’s time our elected officials implement the same level of reporting requirements to PSAOs as they do for other entities in health care because the majority of consumers do not think independent pharmacies need the government handouts to increase their profits by getting involved in the pharmacy business at all. They are more interested in their state legislators to continue finding ways to reduce costs to consumers instead of pharmacies that control their pricing despite the benefits they receive from PSAOs and PBMs.

In somewhat of a win for Medicare recipients, legislation was just passed that would pay Medicare Part A and B premiums in the form or a rebate to eligible seniors over 65. This would reduce their Social Security costs on an annual basis by picking up the Medicare payments issuing rebate checks on an annual basis. In addition, a bill was passed to give New Jerseyans $450, $1000 and $1500 tax rebates depending on income. In any case Social Security income is taxed by the IRS so this program’s benefit will be dependent on tax rates so taxpayers will ultimately be footing the bill in some form or another.