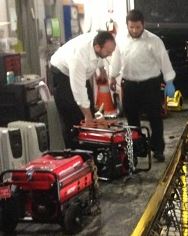 The Christie Administration announced today that the Federal Emergency Management Agency (FEMA) has approved the State of New Jersey’s request for more than $2.5 million to purchase 52 portable generators. The generators can be deployed by State emergency responders during a major power outage to critical assets such as shelters, hospitals, public safety facilities and retail fuel stations located along key thoroughfares.

The New Jersey Office of Emergency Management (NJOEM) will store the generators at three strategic locations in the northern, central and southern parts of the State. NJOEM will deploy the generators based on criteria including nature of the emergency and the threat of loss of life or injury to the public.

“As we learned during Superstorm Sandy, reliable access to back-up power when the electric grid fails is crucial to ensuring a swift and effective emergency response,” said Colonel Rick Fuentes, Superintendent of the New Jersey State Police and State Director of Emergency Management. “By establishing a cache of strategically-located portable generators, State emergency management officials are taking an important step in making New Jersey more resilient when faced with future disasters.”

The State has also dedicated approximately $40 million in FEMA HMGP funds for counties, municipalities, and other critical facilities to support a variety of alternative energy solutions to enhance energy resilience for critical assets.

Other State energy resilience initiatives include: using $200 million in federal disaster recovery funds to establish the New Jersey Energy Resilience Bank, the first public infrastructure bank in the nation to focus on energy resilience; and the State’s collaboration with the U.S. Department of Energy and Sandia National Laboratories to design “NJ TransitGrid,” a first of its kind transportation microgrid capable of providing highly reliable power in the event the larger electrical grid fails.