NEW: Eisemann Prosecutor Accused of Misconduct in Another Case 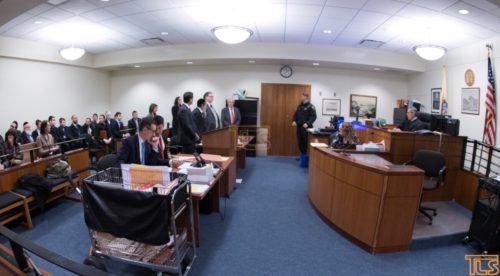 The prosecutor who has been accused of a Brady violation by the Eisemann defense team this week is also under fire for alleged misconduct in another, unrelated case.

According to a report on the New Jersey Globe, a lawyer representing Holmdel Township slammed deputy attorney general John Nicodemo for communicating about his case with a Superior Court judge without telling him.

Nicodemo mailed a letter to Judge Linda Grasso Jones on December 21, but he did not copy any of the attorneys involved in the case and did not electronically file the letter, the NJ Globe reported.

That case pertains to a former tax appeal attorney, Matt O’Donnell, who is a participating state witness against a number of North Jersey politicians. Holmdel Township filed a civil lawsuit against O’Donnell, and Nicodemo, involved in O’Donnell’s criminal case, wrote a letter to the judge presiding over the civil case without e-filing it or sharing it with the involved attorneys.

A spokesman for the New Jersey Administrative Office of the Courts told the New Jersey Globe that Nicodemo was required to file documents electronically using the eCourts platform, and because he didn’t follow the procedure, the court staff uploaded the letter themselves three weeks later.

“As the deputy attorney general for the Office of Public Integrity and Accountability, I am extremely surprised and disappointed that you would forward a letter to Judge Grasso Jones even though you are not part of this litigation,” Holmdel’s lawyer, Jerry Dasti, wrote in a letter to Nicodemo. “It is even more shocking that you would not copy the attorneys who are representing various parties in the civil action.”

Yesterday, TLS broke a story in which lawyers for SCHI founder Rabbi Osher Eisemann accused Nicodemo of withholding key evidence from them, despite having had a legal obligation to share that evidence. Withholding evidence in a criminal case constitutes a Brady violation, which can be grounds for the convictions to be dismissed.