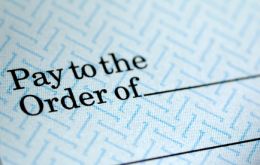 A bill that would make it illegal to mail unsolicited checks that once cashed enroll consumers in costly programs was advanced Monday by the Senate Commerce Committee. The bill was sponsored by Assembly Democrats Paul Moriarty and Valerie Vainieri Huttle.

Moriarty (D-Gloucester/Camden) drafted the bill after a constituent showed him an unsolicited $8.25 check they received from a company. Cashing the check would enroll the consumer in an automotive roadside assistance program that costs $15.99 per month.

“These so-called free money offers are at their best deceptive and, at their worst, downright dishonest,” Moriarty said. “Right now, consumers are at their most vulnerable to fall for a scheme that appears to offer them instant cash but would end up costing them much more in the long-run.”

“It’s unfortunate, but true, that people try to take advantage of others in this tough economy by throwing what appears to be free money their way, but nothing in life is free,” said Vainieri Huttle (D-Bergen). “This bill, quite simply, does the right thing by ending these scams.

The legislation (A-625) makes it an unlawful practice for a person to send an unsolicited check to an individual that, upon being cashed or redeemed, automatically obligates the recipient to pay any fee or enrolls that individual in any club, service, plan or continuing agreement.

Checks that meet the following conditions are exempted from the bill’s provisions:

· Checks that are mailed in response to a request or application for a check or account by the individual;

· Substitutes for checks or accounts previously issued to the person; or

· Those related to a consumer credit transaction or consumer loan issued by certain types of financial institutions.

In addition, violations can result in cease and desist orders issued by the Attorney General, the assessment of punitive damages and the awarding of treble damages and costs to the injured party.

The bill was approved 74-0 by the Assembly in February.