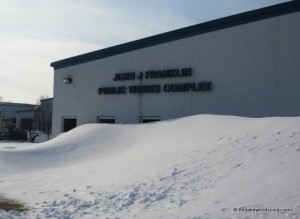 Should Lakewood get any more snow storms, the town could run out of salt, TLS has learned. Committeeman and liaison to Department of Public Works Ray Coles tells TLS that as of Tuesday, the Township’s salt supply is nearly depleted, and that the current supply could run out should the Township get hit with another storm.

The DPW is currently waiting for another delivery of salt, says, Coles, though it’s being delayed because if the nationwide shortage. The next shipment is expected to be approximately 20 tons, which is stored in a massive shed at the John Franklin site.

Townships and cities nationwide are scrambling to get their hands on salt shipments. New Jersey is currently waiting on a 40,000 ton shipment which was reportedly held up in Maine because a foreign-flagged vessel was carrying the salt. According to the Merchant Marine Act of 1920, ships carrying cargo between U.S. ports must be U.S.- flagged.

Some Lakewood stores have also run out of salt. [TLS]