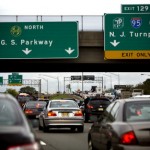 An old photo shown at the beginning of a New Jersey Turnpike Authority presentation shows just how far signs have evolved on the Turnpike in the last 59 years. At the beginning of the sign evolution, a Turnpike worker is seen using a pole to adjust a sign that reminded drivers, “No Housetrailers” and warned them about wind conditions from interchanges 1 to 11. When a cop wanted to post a different speed limit, he simply covered the old number with a new placard. Under a $10.9 million contract awarded today by the Turnpike Authority, drivers on the Turnpike and Garden State Parkway will get new, real-time variable message signs warning them about congestion, construction and commotion.

The 33 signs, to be installed between this September and May of next year on two of America’s busiest toll roads, will be easier to maintain, have better visibility and be more up to date than the old signs, officials say.

They will be on an 85-mile stretch of the Turnpike starting at milepost 32.2 in Burlington County and heading north to Bergen County. On the Parkway, they will be between mileposts 6 and 168, from Cape May to Bergen counties.

Workers will be able to maintain the signs without having to close a traffic lane. And drivers will see posted speed limits and estimates for how long it will take to reach major routes such as 78 or 280.

Weather stations will provide the conditions of the roadway.

Rich Raczynski, chief engineer for the Turnpike Authority, said the old fixed-message signs were difficult to maintain and outlived their usefulness.

“A lot of the neon lights are out, and we don’t have the replacement parts,” Raczynski said.

Maintenance workers will be able to access the 8 1/2 feet by 24 feet variable message signs from the shoulders.

A half-dozen other contracts, encompassing 187 signs, are expected to be approved between October of this year and January 2013. Star Ledger