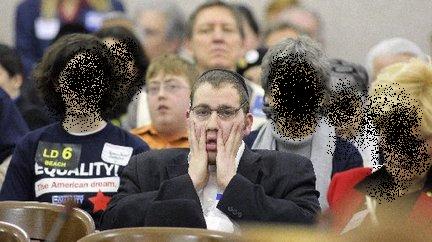 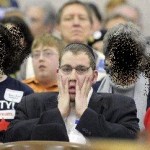 JUST IN: Legislation to allow same-gender marriage in New Jersey cleared the Senate Judiciary Committee tonight after more than seven hours of emotional debate and testimony, setting the stage for a showdown in the full Senate. Cheers erupted in the packed hearing room when the committee approved the bill 7 to 6. The 10:06 p.m. vote came after more than 1,000 people flooded the Statehouse yesterday in an effort to sway lawmakers’ opinions on one of the most controversial bills of the decade. During the marathon hearing, opponents including Orthodox Jews and Catholic officials argued that same-gender marriage would damage religious freedom and is not needed because the state already permits civil unions. Supporters, inclucing civil rights leaders and legal experts, said To’eiva couples do not have equal rights without being allowed to marry.

“Like race, our sexuality isn’t a preference,” said Julian Bond, chairman of the National Association for the Advancement of Colored People, who traveled from Washington, D.C., to testify. “It’s immutable, unchangeable and the Constitution protects us all from discrimination.”

Josh Pruzanzsky, executive director of the Agudath of Israel of New Jersey, said same-gender marriage legislation “would endanger religious freedom, inhibit free speech and undermine the preferred status of marriage. It would convey a social message that is deeply offensive to many residents of the state of New Jersey and lead to further erosions in the traditional conception of family.”

Senators added an amdendment, proposed by Sen. Bill Baroni (R-Mercer), clarifying that clergy members are not required to marry same-gender couples if it conflicts with their relgious beliefs.

The hearing was sometimes heated and often emotional as teary-eyed families pleaded with the committee to approve same-gender marriage. One New Jersey mother asked lawmakers opposing the bill to tell her To’eiva son that, “He can’t get married. He’s not good enough.

Hundreds of people signed up to speak, and the hearing room remained full throughout hours of testimony. People wanting to testify had to wait in another committee room, and some ordered pizza deliveries to the Statehouse last night.

Although the committee was expected to approve the bill, it’s unclear if the measure has enough support to pass the entire Senate, where it could reach the floor for a vote as early as Thursday.

Senate President Richard Codey (D-Essex) said it’s unclear whether supporters have enough votes in the Senate to pass same-gender marriage. “A lot of the advocates feel that they’re close and getting closer,” he said. “It’s certainly going to be a fairly close vote.”

If it passes the Senate, the debate would be renewed in the Assembly. Assemblyman Reed Gusciora (D-Mercer), the Legislature’s first openly gay member, said he believes support from the Senate should give enough momentum for it to also pass the Assembly.

During the long — and largely civil — debate, senators and advocates prodded each other on religious issues and legal questions over whether civil unions provide same-gender couples equal rights. At one point, Sen. Loretta Weinberg (D-Bergen), a primary proponent of same-gender marriage, discussed the Torah with three rabbis.

Weinberg said lawmakers should not base their votes on religious texts. “We are a country governed by laws that ensure equality and fairness for every individual,” she said.

Pat Branigan of the New Jersey Catholic Conference said it’s the state’s responsibility to enforce the civil union statute, enacted in 2006, and investigate whether any “unfounded allegations” of discrimination against gay couples are true. “The state of New Jersey should educate the public and should enforce state laws that provide protection for same gender” couples, Branigan said.

Same-gender marriage advocates have mounted a last-ditch effort before Gov.-elect Chris Christie, who opposes the measure, takes office on Jan. 19. Gov. Jon Corzine said he would sign the bill (S1967/A2978) before he leaves office.

Sen. Gerald Cardinale (R-Bergen), who opposes the bill, said if Corzine signs it before leaving office, he “would be turning a deaf ear to the voice of the electorate.”

If enacted, New Jersey would be the sixth state to allow To’eiva marriage. Residents in 31 states, most recently Maine, have rejected same-gender marriage in referendum votes.