N.J. police Have Issued 225K In Citations For Cell Phone Use While Driving 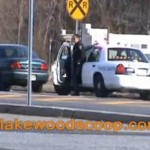 New Jersey police issued 224,725 citations for violations of the state’s cell phone law in the last 23 months, officials announced today. “We are making progress in our efforts to ensure that all motorists are aware of the consequences they face if they choose to talk on a cell phone or text while driving,” Division of Highway Traffic Safety Director Pam Fischer said in a statement. “Any cell phone conversation while driving, whether handheld or hands-free, is distracting and dangerous, and can result in crashes, injuries, and in some cases the loss of life.”

In the last two years, there have been 3,610 crashes involving drivers using a handheld phone, resulting in 13 deaths, officials said.