N.J. Intervenes in Litigation to Ensure All Residents Will Be Counted in the Census 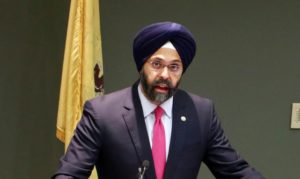 Attorney General Gurbir S. Grewal announced today that New Jersey is seeking to intervene in a federal court case in the U.S. District Court in Alabama in which the State of Alabama is seeking to prevent the Census Bureau from including all U.S. residents – regardless of immigration status – in the official census count.

The federal government’s longstanding policy, known as the Residence Rule, provides that citizens of foreign countries living in the U.S. are counted “at the residence where they live and sleep most of the time” without regard for immigration status. Alabama’s lawsuit seeks to invalidate the Residence Rule and prevent undocumented immigrants from being counted at all.

As in 2018 — when New Jersey helped to defeat a Texas-led motion for a preliminary injunction to end the Deferred Action for Childhood Arrivals (DACA) — New Jersey seeks to fight for a federal policy the Administration may not adequately defend in court. The federal judge overseeing Alabama’s challenge characterized the Administration’s defense of the Residence Rule as “half-hearted.”

“We won a major legal victory in preventing the Administration’s illegal attempt to add a citizenship question to the Census, but the fight continues,” said Attorney General Grewal. “The Census Bureau has always counted every resident in the past, regardless of immigration status, and there is no reason to change course. But now another state is challenging that longstanding and bipartisan approach, and we have questions about this Administration’s willingness to stand up for it. We’re stepping in to make sure the Census Bureau conducts as accurate a count as possible – something that matters here in New Jersey and across the country.”

The brief filed today in support of the multi-state intervention motion notes that the U.S. Constitution requires an “actual enumeration” of the population every 10 years to count “the whole number of persons in each state.” The decennial count’s principal purpose, the brief notes, is to apportion members of the House of Representatives among the states. The brief further explains that the count is used to allocate federal funds, to draw electoral districts and to determine the state-by-state allocation of electors to the nation’s Electoral College.

The decennial count is one of the most critical constitutional functions our federal government performs, the brief asserts, and the Residence Rule exists to ensure a count that is “as accurate as possible,” which in turn provides for “a fair and equitable apportionment” among the states.

The brief filed today calls Alabama’s attempt to end the counting of individuals based on their undocumented status “extraordinary and unprecedented,” with “profound consequences” across the nation. The brief also argues that the federal defendants “will not adequately represent the proposed interests” of the states. (Defendants include the U.S. Department of Commerce and the Census Bureau, as well as the U.S. Secretary of Commerce and Census Director).

Not only has a federal judge already questioned the Administration’s commitment to defending the Residence Rule, but U.S. Attorney General William P. Barr recently made a White House speech in which he said the federal government is still studying the issue of “whether illegal aliens can be included for apportionment purposes.”

“Were the current Census Bureau policy to be struck down, it would have a harmful impact on New Jersey in multiple ways. Immigrants account for approximately 22.5 percent of New Jersey’s population, and in 2014, nearly one-in-four immigrants in New Jersey was undocumented. New Jersey apportions its Senate and General Assembly districts using federal census data. In addition, New Jersey receives hundreds of millions of dollars in federal funds that are allocated on the basis of census data, including the Highway Trust Fund, Urbanized Area Formula grants, Title I funds, Special Education Funds and the Child Care Development Fund.”