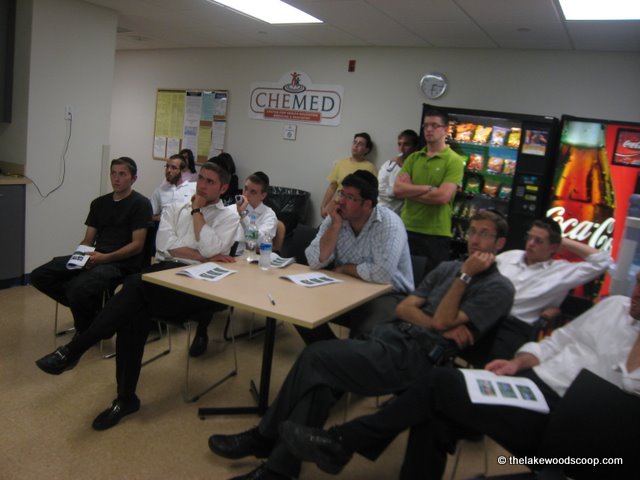 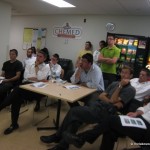 (File photo of Chaveirim members meeting with health officials at Chemed). Public health officials say that now that there are lots of shots, their biggest fear is complacency. The swine flu, also known as H1N1 flu, is not like the seasonal flu that typically debuts in late fall and wanes by late winter. It can come back. Susan Walsh, state deputy health commissioner, said people should get their shots now while supply is high to guard against a another possible wave. “Many people are used to seasonal flu, and once they don’t see illness in their schools and among their families” they believe the threat is over, Walsh said. “Just because it doesn’t look like it’s not here doesn’t mean it isn’t,” Walsh said.

The swine flu first erupted last April and subsided by mid-summer before it returned in early fall. Forty-two New Jersey residents have died. The shot has been available to anyone regardless of health status or age for about a month.

At the height of the frenzy over getting a shot, Middlesex County vaccinated about 40,000 people, Middlesex County Public Health Officer David Papi said. Now the county has 50,000 doses stockpiled and there are no restrictions on who may get the vaccine, he worries about waning interest. “The disease is not as prominent in people’s minds,” Papi said.

Walsh said despite this fear, hospitals, clinics, health department, and physicians’ offices continue to place orders for thousands of doses of vaccine every day. “Health departments are scheduling clinics, and people are attending,” she said.

Jennifer Connelly, of Spotswood, said she was debating whether to get her 2-1/2 year-old son, Bobby, vaccinated until her pediatrician advised her to do it because he has asthma.

“The doctor said they are expecting a second wave,” Connelly said.

Bobby walked with his mom over to see Veronica Fahrman, a smiling county public health nurse bearing a pocketful of stickers and a bowl filled with lollipops. And once he was done writhing and wailing as she injected his arm, Fahrman rewarded the boy with both.

Connelly declined the shot for herself. “Most people I know are not doing it,” Connelly said. “I think our bodies need to build up immunity.”

Chris Thomas, 62, of Piscataway, who sat on a bench outside JC Penney’s waiting for his wife to get her shot, said he saw no down-side to getting the vaccine.

“I’m healthy, but it gives me a boost of confidence,” he said. “Better safe than sorry.” Star Ledger.